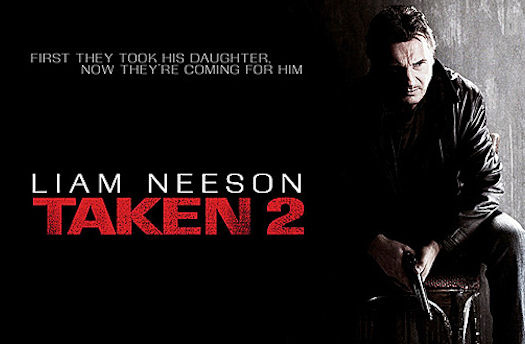 Runtime: 98 Mins
Rated: PG-13
What To Expect: An inferior sequel, made for the sake of it. Sad and tiresome.

They say this is a hollow sequel, but I am of my own mind and had to check it out anyway.  I’m not a man opposed to sitting through the occasional gratuitous sequel.  Shit, I tend to rate some sequels higher based on their escalating ridiculousness.  Some sequels recognise it themselves by planting tongue in cheek.  Taken 2 is not one of those sequels.  It is gratuitous but it doesn’t escalate, in fact it can’t even match 20 minutes of the first let alone excel over it completely.  It lacks the raw drive and determination of the first.  You can emphasize with Neeson in Taken but I don’t emphasize with him here, going through the motions.  Hey man, you brought your wife and kid on a dangerous job.  If you’re gonna be stupid, at least crack out the one-liners.  The character from the first movie (Not the actor sadly) would never have let himself be found in the situation he’s in here – screwing up and getting somewhat sloppy.

Taken 2 is pretty useless.  “Now they’re coming for him”.  Well you know, they sure do take their time getting there because no-one gets ‘Taken’ untill the 40 minute mark.  Now for a 90 minute action movie, this is some serious log-jamming and sure enough, it affects the additional 40.  Whereas the original was straightforward and used its time properly, the remaining half of the second is anything but.  Its somewhat all over the place, there’s a lot of doubling back, some stupidity and even the occasional cliche.  The old chase scene where a car outruns a train?  I can forgive that type of thing for a movie with a struggling budget, but not for one that will take profits amounting to half the GDP of Portugal.  Speaking of which, they went back to cheap location-scouting – a near carbon copy of the original’s visuals doesn’t help, right down to the cobbled backstreets lined with Albanians.  Would it have been so hard – or expensive – to take the audience somewhere radically different?

The action here is a mixed bag and mostly not a positive one.  Olivier Megaton might have the manliest fucking name of any director, but at best he’s a poor man’s Louis Leterrier.  For example, see The Transporter 3, a film Taken 2 reminds me of.  Average and hollow.  At best some sequences are serviceable.  It can be rough but effective, but you know, I think this might be Neeson more than anything else.  At worst, this movie is softer than Taken, at least the European cut.  Bullets fly but rarely connect.  PARENTAL GUIDANCE… we meet again.  And of course there’s the dreaded shaky-cam-hyper-edit syndrome.  E.g. in the first fight scene, you might as well close your eyes.  “Oomph, “Y’eauhgh”… I can discern whats going on more by listening than by actually looking at the fucking screen. Its not in every scene, so is the director experimenting or something?  Well a sequel this mainstream isn’t a place to do it, Jack.

Taken 2 barely makes the ‘nothing else to do for 90 minutes’ cut, like a good DTV would. But this isn’t a good DTV, its a big money production.  Or is it?  They only spent 45 million on it – and that’s likely a lie.