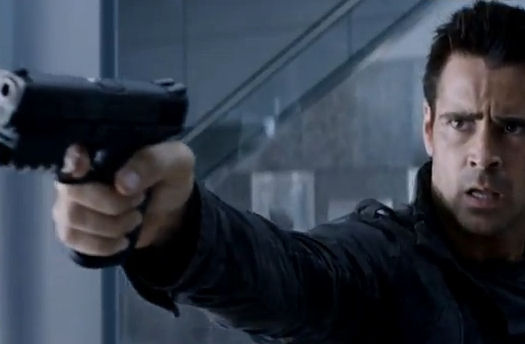 Runtime: 118 Mins
Rated: PG-13
What To Expect: The embodiment of all that is wrong with remakes

Total Recall is a remarkably soulless chore.  It’s one of those movies where you constantly check the time on your phone, I guess we don’t do watches anymore.  The story, about a man seeking enrichment through intangibly inauthentic thrills planted in his head is ironic, because this whole movie feels vacuous and disingenuous.  There’s barely a square foot around the actors on screen that isn’t CGI, the whole thing looks like a cutscene from a videogame that’s trying to impress with its rendering skills.  Like some Xbox game that never really left the shelves.  How could they get it wrong?  This is a remake of a classic movie and open to all manner of inventive shit, this may be blasphemous but – this had potential.  It’s a disaster that not only can’t find its own character but can’t even replicate the original’s selling points.

Despite being a remake, this movie isn’t content with copying the original.  It has to steal from other movies too.  Like the Running Man, another Schwarzenegger character getting an implant removed in a chair at an underground resistance base.  Or more blatantly, a near scene-by-scene rip off of The Bourne Identity.  In that movie, an agent with memory difficulty dispatches cops with skills he wasn’t aware he had, before heading to a bank to pick up supplies from a deposit box.  Total Recall has stolen that in its entirety, only its applied badly – among a pile of shitty CGI.  In fact, I wondered, how did they get away with not violating copyright?  And the story?  By the end of the movie, the director hopes that you wonder whether or not it was a dream.  A little touch that he thinks is clever, that will get you wondering.  But this would require me giving a fuck.  And by the end of this movie I was fresh out.

Gone is the humor, the satire, the wisecracks of the original movie.  Coming into this movie expecting the occasional grin, like you might have taken from Arnie’s deadpan one-liners?  Forget it.  Hoping for some sly satire, maybe a nod to digital dependence or media?  Nope, whoever made this movie evidently isn’t aware of who Paul Verhoeven is.  The action in this movie is garbage.  Total Recall’s idea of action is to really go to town and ratchet up the CGI chaos even further, you really do wince at the abundance of futuristic fakery.  Not for one second is there a sense of danger because of it, and that ruins the whole point.  Some scenes look so spectacularly fake and projected, that you can clearly see that the actor is having a hard time trying to appear as if they’re not running on the spot. What I mean by that is that the actors appear to be running on treadmills in front of green screen.  It’s clearly disorientating for the actors, so how is that supposed to leave the viewer feeling?  When is this CGI shit going to stop in movies?

The whole thing is a hollow fucking bore and Len Wiseman needs to find alternate employment.  An affront to the 1990 classic, its PG-13 too.  Can I have this experience erased from memory?

Related Items
← Previous Story Stick a fork in ’em: These franchises are done
Next Story → Expendables 3 hype under way: No Seagal or Cage