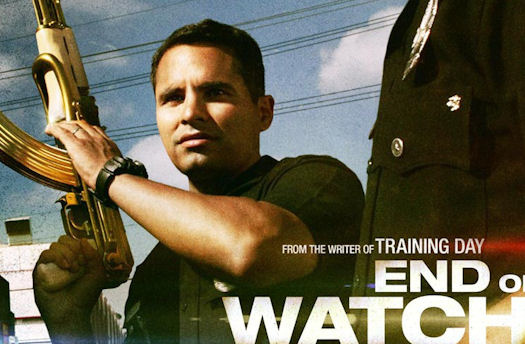 I expected this movie to be shit, or at least mediocre.  A story about two hardass cops when the cast is that airhead Jake Gyllenhaal and that soft spoken FBI Agent from Shooter?  Those two greenhorns would never convince us as men who could handle L.A. alleys at night.  And worse, it was going to be ‘found footage’?  I should’ve looked closer, because this movie was done by David Ayer, who is now off my shitlist after wisely backing off from a Commando remake.  Ayer, the guy who wrote U-571, Training Day, The Fast and the Furious (first movie is still the best), Dark Blue and Harsh Times.  He also directed Harsh Times as well as Street Kings.  In other words, the perfect guy to execute a movie like this.  Ayer cop movies are usually good because shit just gets real.  Not many emo fag kids show up at Ayer movies.

The tone is established early, when being cautioned by Pena, a thug determines that he doesn’t look like no cop.  Good call, thug.  And, claims the thug, if allowed and if not for his badge, he’d beat his ass half to death.  Pena accepts the challenge and a rough fight ensues which he wins, convincing us, barely, that he is not to be fucked with.  This movie has a violent distaste for sugar coating.  It is a nasty and sober look at real life in L.A. and among its underclass.  It’s almost like a real version of the GTA game series, but through the cops eyes and without the light heartedness.  That’s not to say it isn’t funny though, its bleak but it’s black humored all night long.  I mean it’s nice to have some realism where cops casually talk about settling scores by committing murder.
The other thing about this movie is the gimmick that is attached to it.  ‘Found footage’, which should suggest a spoiler of sorts, where Gyllenhaal is filming his experiences for a documentary.  Or something.  That’s a bad thing.  But having said that, it’s the best ‘Found Footage’ movie I’ve seen because after a short while, you forget that it is filmed in that way.  It is well done, the point being to engross in the ‘ride along’ experience.  Although Ayer had no need to do that, his authentic touch is fine without it.  On the downside, there’s too much family bullshit, talk of marriage etc.  I really don’t want to see Jake Gyllenhaal breakdancing at his wedding through a cam-corder lens.  It adds precisely fuck all in the scheme of things.  Some of the dialogue is good though; “If you can live without her, then man-up and cut her off. Don’t string her along.”  The other thing is that it’s a good movie with a poor cast.  Gyllenhaal, however hard he tries or however short he crops his hair, will always look like some college boy nerd to me.  I guess Randy Couture was busy during auditions.  Right, Randy?

A quick indulgence with Ayer playing to strength.  Ayer is good at this, he must’ve been a gangbanger in his youth or some shit.