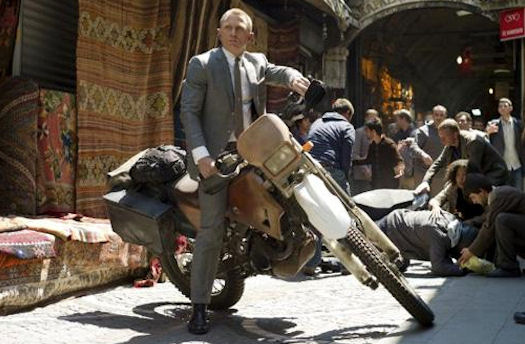 Runtime: 143 Mins
Rated: PG-13
What To Expect: An overrated chore. Camp one minute, serious the next.

I’m not a big fan of Bond movies.  They’re either too camp and cheesy or too boring.  I have no taste for Connery’s movies and even less for Moore’s.  There’s only so much winking at the screen while jumping the shark I can take.  Although I have two exceptions – License to Kill and GoldenEye.  But by the time the Bourne series came about in the early 00’s with cool, lean 21st Century espionage (albeit with the worst editing of all time), Bond was still driving around in invisible cars and having a gay old time with Thunderbirds villains.  It looked embarrassing and in an attempt to keep up, they went from one extreme to the other – from pure cheddar to pure gruel. I found Casino Royale to be an adverse and bland reaction, and Quantum of Solace to be even more forgettable.  This time around, I somehow had myself convinced that Skyfall would be the first Bond since GoldenEye I was going to enjoy.  Wrong.

I defy anyone to watch Taken (2008), a film about an agent with a particular set of skills and not be seat-grippingly thrilled.  Bond has these skills, so why the is this movie boring with hefty amounts of just plain shittiness?  It should’ve been so easy; you take the black ops intrigue from Bourne, the kinetic energy/’skill set’ from Taken, the name/franchise of Bond with all of the iconography that comes with it (car, theme etc)… put all that together and you have at least a decent ripoff.  Not to mention Craig, he has the stuff to become an action man if used properly.  Needless to say, this is not what they did with Skyfall.  I guess that was just too fucking hard.  The problem is it’s just plain dull.  It has that old weathered cliché recently seen in Die Hard 4.0 – former agent goes rogue and turns on his employers.  When this was revealed at the halfway point as the main story, alongside the fact that they just fucked up Bardem’s potential as a villain – I felt all remaining life just suck right out of this movie.  The last hour was going to be a long haul.

Speaking of Bardem and ruining potential, you’d think that as the guy who played the villain from No Country for Old Men, that he’d be perfect as a Bond villain.  Going up against Craig, a badass professional.  Well the makers of this movie had other ideas.  Here, Bardem is taken straight from an Austin Powers movie.  Think camp, then forgettable.  And as for Craig, I believe this is a guy who needs to be kept moving.  He isn’t charismatic enough for comedy or drama, no surprise then that the director does the exact opposite of playing to his strengths.  You could argue that a movie with intrigue could get away with this, but the script is borderline laughable.  A story this crap being stretched to 140 minutes is unforgiveable.  Is it all bad?  Not really, it has a few minutes of impressive action sequences, these are the scenes conveniently shown on TV to promote it.  Funny, they forgot to mention the rest is shit.  And is it just me or is the finale in the country house a ripoff of the Bourne farmhouse sniper sequence, only just plain dull and messy?  Seems like 10 years in and they still don’t get it.

Once you’ve seen the opening sequence, which is good, turn it off.  It’s all shit from there.  When you’re doing it worse than Len Wiseman, you got serious problems.