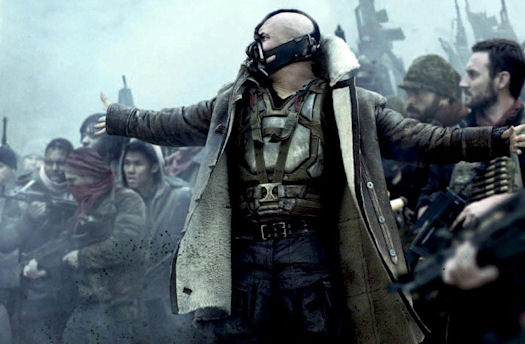 Runtime: 165 Mins
Rated: PG-13
What To Expect: Interminable, boring and a big question mark over contemporary film criticism
A longer review today, because this is by all accounts the movie of the year.  They even call it one of the most exciting “Action” movies of the year.  Nuh uh.  Here’s another “action” movie slash comic book yarn that all Manly Men should avoid like a woman in a nagging mood.  It’s even worse than the first two movies, two boring yet profusely over hyped cock ups.  Movies which served to remind us that duh turrorists are out there (but only want to watch the world burn).  And apparently the death of a cast member (Ledger), a publicity stunt where you recruit your sister and mother to act as false victims of battery, who then conveniently drop charges make a poorly directed phonebook of exposition an unmissable masterpiece.  The latter a problem that has returned in ‘The Dark Knight Rises’.

After the opening sequence, the next 40 minutes of this movie are jammed packed with page after page of endless dialogue that contributes little to nothing to the actual plot.  The dialogue is as near ceaseless as it is bereft of any real substance.  Case in point, after closely listening, only around the half hour mark did I pick up on Caine giving a vague one-sentence reference to the history of Bane.  This is the only thing of significance that happens in the first 40 minutes besides the opening hijacking.  Blink and you’ll miss it.  Exchanges that could’ve efficiently been delivered with two lines are drawn out achingly at a ratio of 20:1.  And, as if to give them meaning, the cast gives each other the frowning of a lifetime.  Only the most retarded will find quality in dialogue for the sake of dialogue, convinced that he’s witnessing history.  It’s actually kinda funny.  And this doesn’t just happen in the first 40 minutes, it happens throughout in an attempt to fill the bloated 2 hours and 45 fucking minutes.  Ever watch The Sopranos?  Where David Chase could brilliantly orchestrate a scene and add meaning to it without the actor uttering a single word?  Nolanites, pseudo film buffs that they are, could never appreciate that.

In the previous movie, the premise was clear by the end; terrorist fucking shit up.  “Some men just want to watch the world burn”.  So, no motive then?  Thought not.  In this movie, Nolan has decided to get edgy, buck the trend and go for this premise:  Terrorist has come to town to fuck shit up.  Mind you, he doesn’t actually begin his operation untill 65% of nothingness in this movie has passed by.  In other words, this one doesn’t have motivation either.  His line of dialogue, then; “It doesn’t matter who we are…” has added importance.  Instead of fleshing out the character, there is endless dialogue not involving Bane and the development of a truly awful Catwoman and a third character that Nolan doesn’t even have the balls to call Robin.  So anyway, after we basically learn jack shit about Bane The Terrorist, he comes to town to hold the place hostage with – wait for it, you’re gonna love this one – WMD.  So… duh turrorists are out to hate on our freedumbz with WMD, just for the hell of it and after 90 minutes of hollow exposition.  If you listen closely, you’ll hear quite a few people calling this the epitome of modern cinema.  Good Christ.

If you can stomach such condescension, or if you’re too stupid to have it register in your head, it isn’t the only problem with this ‘serious’ movie.  It is, in places, quite laughable into the bargain.  Take Bane, unless I’m mistaken, Bale has 2 inches and 20lbs on Hardy (nice lifts) and that is the wrong way around.  Or his character, ‘grounded reality’ these days apparently involves two dimensional caricatures.  Even in Batman Returns, Burton had already fleshed out more backstory for the Penguin in the opening credits than Bane gets in this entire movie. In other words, the Penguin, to some extent, could be empathised with.  Or how about a police chief disarming a neutron bomb?  Yup, y’see all you have to do is find the damned thing.  Then you merely make it one with the fusion reactor, 22nd century technology, by plugging that thing in there, and pushing that thing into the side of that.  Job done.  As for the action, if all else fails?  I notice this time that Nolan was forced to ditch the old bandaid for being a shit action director of having the camera shake like fuck.  Its absence doesn’t improve things, in fact, it only highlights why he did it in the first place.  Drab, unforgettable and dire ‘action’, bereft of any adrenaline.  Oh, and he’s still failing at attempting to rip off Michael Mann’s eye, not that that belongs in a comic book movie anyway.

It’s amazing what conformity will do.  Did you know the first person to have their negative review appear on Rotten Tomatoes received death threats?  Ironic, in a film that poorly articulates a message of protecting our freedumbz.