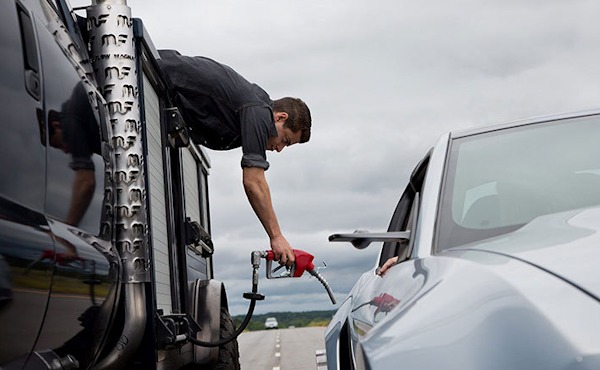 The challenge in a shit movie like this is to resist the temptation to get up and walk out. I almost did several times. The closest times were when the movie went into Justin Lin/Fast & Furious territory with cars flying seventy feet through the air, then six hundred feet through the air as I remembered the director of this movie talking a big game about realistic chase sequences. Weird, because this shit is light years and galaxies away from Bullitt, To Live And Die in L.A. or hell, even the first Fast & Furious movie. The fact is that like recent Fast & Furious movies though, every time someone puts the pedal to the metal you expect something really, really fucking silly to happen.

Even for a dumbed down popcorn movie, the plot is one of the most stupid things I’ve ever heard. Tobey Marshall (Aaron Paul), recently framed for the manslaughter of his friend decides to exact revenge on Dino (Dominic Cooper), who really killed said friend by… driving at high speed across the country from New York to California to defeat him in a race. What? Why not just take a flight down there and stab him? What good is racing him going to do? But seriously, being dumb can be forgiven but dragging on can’t, which is what this movie does, in between the fridge nuking not a lot happens over the course of 130 tedious minutes. A movie like this must keep up the pace to cover up its gaping plot holes, not hit the brakes to force us to examine the nonsense. Such as the dialogue, which also sounds like something from Xbox Live with a lot of bellowing YEAHHHHHH’s with accompanying fist-pump, or the occasional slowed down NOOOOOOO with accompanying slo-mo run.

It’s not all bad though. There’s some serious hardware in this movie. Like the Koenigsegg Agera, Bugatti Veyron and Shelby Mustang GT500. There’s also a distinct lack of shaking-cam-syndrome, not just that there’s little of it, there’s none of it. So little that I’m sure the director made a deliberate attempt to buck the trend. There’s also a distinct toning down of CGI – when a car crashes, it’s usually a physical vehicle that is violently thrown up against some wall or other. This stuff is to be applauded even if it’s not too well directed – getting practical with a steady camera is no excuse for lack of panache. Although I do mention ‘toning down’ of CGI rather than complete absence, as cast and crew boasted. Some of the shots look slightly alien and synthetic, especially the in-car viewpoints while speeding. You definitely can’t smell the gasoline. This is ironic given that it’s a video game adaptation.

Nor can you appreciate the sounds, for example the supercharger of the GT500. In the Bullitt chase scene Peter Yates cut all music so we could revel in the sounds of the Mustang. Here, all we hear is inappropriate epic saga music throughout and and a jibber-jabbering bitch in the passenger seat. Silly nonsense from women in the passenger seat during gear changes – inexcusable. Some people maybe be wondering, what’s better, this or Fast & Furious 6. The better question is, which is worse? The answer is this, marginally – even Michael Keaton‘s comedic relief role can’t save it

This 2D Blu-Ray release is basic stuff.  If only they put enough effort into the features as they did the queue of trailers that preceed it.  It has a handful of YouTube-sized documentaries ranging from 9-12 minutes (I wonder if they’re actually on YouTube).  They mostly hyped up the practical makeup of the movie, looking at replica cars being thrown around violently for real, showing us how they did it.  And a closer look at the Waugh stunt family is offered, which is nice, it’s good to see a movie this big giving work to people like that, who do things for real like the old days.  Deleted scenes?  Not worth mentioning, about four minutes of unfinished footage.  One dissappointment is little to no talk of the 5.8 Mustang, basically the second star of the show behind Aaron Paul.  No feature on it?  Not good enough.  Still, if you’re interested in the movie, at least the transfer is pretty impressive – but to me almost too sharp, it’s almost like it makes it easier to spot the cars as replicas.  Better than that CGI though.

Overall, the movie is mediocre at best and if you’re hanging on the Blu-Ray trying to supplement you off the fence, don’t bother.

Related ItemsAll
← Previous Story The Difference Between McTiernan And Stallone
Next Story → UPDATED: The Expendables 3 Will Be At Comic-Con