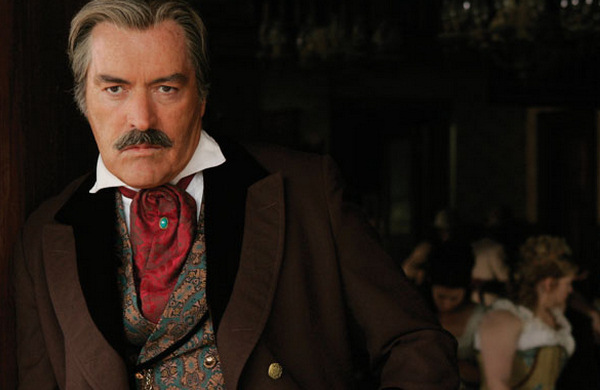 I am sure that most will know Deadwood as a highly popular western series created by HBO that ran from 2004-2006.  It was temporarily put on hiatus, but has since grown quite long as a ‘break’ and was effectively cancelled.  Kim Dickens, who stared in the show, hasn’t given up:

“Deadwood still hurts. The fact that we didn’t get to wrap up that story, and really not a day goes by that, or at this point, a couple of days goes by that someone doesn’t ask about it. If we are going to finish it or not.”

Dickens played Joanie Stubbs, the former madam of Cy Tolliver (Powers Boothe) at the Bella Union. During the red carpet interview she was asked about a possible revival of the series:

“You know what, join the club, because we all feel sort of heartbroken for it, and for David. He’s the true creative genius behind it, and he knew he needed four seasons, that’s it. He had a perfect wrapping it up place. You know, I’ve spoken to him about it, and I think he harbors a hope and he’s always open to the possibility.”

This is a show I never got around to watching myself.  To show my ignorance, only now am I brought to realise that the inimitable Powers Boothe is in it.  That will have to change very soon.