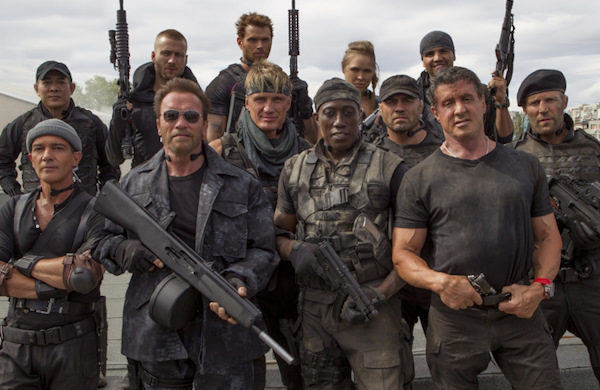 Years from now people will look back at this slapstick and say, man, what a waste.  Technically speaking, it’s the biggest assembly of action stars to ever appear in a movie.  Go ahead and look over the others, even the first two movies, they don’t have the fire power on display here.  This cast is unprecedented.  And given their age and the fact that this is a once in a lifetime opportunity, it’ll never happen again.  They blew it.  People are talking about the PG-13 rating, but the problems of this movie are much more serious than that.  The Expendables 3 is a bush league farce that disrespects every one of its stars but one, Sylvester Stallone.

In the third go around, they didn’t bother with a plot.  Conrad Stonebanks (Mel Gibson), former Expendable, shoots one of The Expendables in the ass.  Temporarily placing him in hospital.  This routine combat injury drives Barney Ross over the edge, seemingly, as he disbands The Expendables.  Out for revenge, Ross recruits some younger mercenaries to help him do the job, because he will not be emotionally attached to them, should they also receive flesh wounds.  Even better, with the biggest stars in action history out of the way, Sly gets to hog more of your screen and pitch you the idea of future PG-13 movies starring unheard-of bums.  Sorry, but who the fuck did I pay to see this movie for?

Sylvester Stallone, Avi Lerner and any of the other 16 (!)  producers sure do like to see them dollar bills stack up.  They intended to use the good names of Mel Gibson, Arnold Schwarzenegger, Jet Li and others to lure us into said sales pitch for future Expendables spin off material.  That’s why the movie is 25 minutes longer, those minutes go not towards our favourite stars, but to people we don’t know or care about.  Think The Expendables, five years from now, with Kellen Lutz and company – and of course a Stallone cameo.  Case in point – in order to facilitate this, Arnold Schwarzenegger, probably the greatest action icon in film history, takes a back seat to Ronda Rousey.  Outrageous.

The movie also reeks of cheapness.  The corner cutting permeates everything about it.  From the SEGA Genesis ‘CGI’, to scenes being filmed once again in abandoned warehouses and airfields.  What the fuck happened to the half a billion we gave you on ticket and Blu-Ray sales for the first two movies?  You couldn’t for once give us a movie with a budget?  The best illustration of this streak of cut-price film making comes with the final fight.  John Rambo Vs. Martin Riggs?  Nah, it’s a fucking disaster.  Filmed deliberately from a distance and in the dark to try and cover the fact that this duel of the ages is filmed almost exclusively using stunt doubles.  And once again Stallone kicks ass with Barney Ross being untouchable.  Steve Austin, c-rate action star, kicked his ass in the first movie, but Mel Gibson’s stunt double catches a brief beating in this movie?  Why?

Hey, The Expendables 3 is also PG-13.  At the expense of the core audience, the people who grew up with R-rated action, they said fuck you.  We’re going to try and get some extra money out of kids who have never heard of Mel Gibson and most certainly have not heard of dinosaur Kelsey Grammer.  Recently, even Wesley Snipes said that his kids have no real idea how famous he used to be.  His own fucking kids!  In order to make the family friendly cut, showing how much for granted they take you, action sequences are crudely shortened leaving them unintuitive and disjointed.  Not to mention blood free.  A movie like this without sex, swearing and violence is like a Mustang without a V8.  Shame on them for castrating it.

Now and again, director Patrick Hughes comes close to shooting some sweet action sequences, that’s just one more sad thing about it.  He’s a competent director and I bet you he’s filmed more good stuff  than we haven’t seen.  But his work has been plundered by the MPAA and Avi Lerner’s team of ruthless editors.  This is why he was hired and this is why Mel said no.  Creighton Rothenberger’s writing also would’ve  fed us what we wanted, with Wesley Snipes taking out a fool troop of Special Forces soldiers in a fight scene all by himself, and another scene where Statham cuts a man in half with an axe.  These scenes are not in the movie.  Why?  Finally, there’s Mel Gibson.  Mel is a pro, guys.  He does this stuff standing on his head.  He’s the best thing about the movie and puts the whole thing to shame.  But Jesus, I just hope he never watches it.

The Expendables 3 is a disaster, it’s not that it’s a 2/10 movie, it’s a catastrophic and complacent destruction of potential.  Good job Sylvester, you sullied your career.