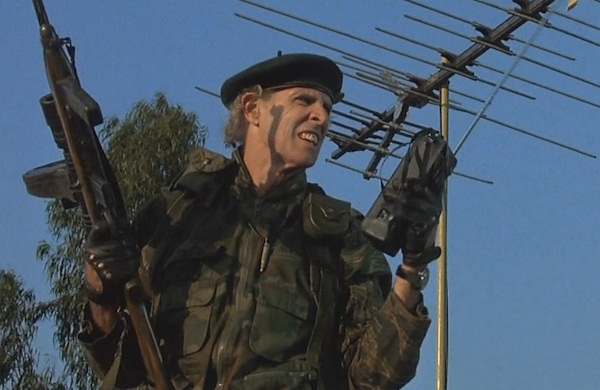 Runtime: 298 Mins
Rated: PG-13
What To Expect: A Blu-Ray release actually worthy of the movie
Click Here To Buy The ‘Burbs Steelbook [Blu-ray]

Sometimes you wait for classic movies to arrive on Blu-Ray for so long that you forget about them entirely, or give up on holding out.  Well 1989 classic The Burbs is finally releasing on Blu-Ray and this really is one you need to be aware of for several reasons.  First of all it is The Burbs, a highly under appreciated comedy and secondly, director Joe Dante and Arrow Films really have come out swinging for this release, giving it strong extras to compliment its hefty 1080p remasters. Because you know, a movie like this deserves better than some suspect compressed satellite 1080i transfer or, worse, a ‘rip’ of said broadcast versions compressed even further and uploaded to some torrent network.

Here is the real deal.  When I put this disc in my player, I tell you it was about a nine on the tension scale!

The Burbs just barely qualifies as Manly Movie material – neighbourhood watch/paranoia and all that.  You gotta keep an eye on them fucking neighbours, especially when they’re unsightly foreigners who dig suspect holes in their backyard in the dead of night.  The perfect men to keep an eye on weirdos who keep horses in their basement would surely be Tom Hanks, Bruce Dern and Ric Ducommun, with Corey Feldman on hand to watch the show and deliver precision guided one liners.  We all know the story, if you don’t, you have no excuse.  This is effortless stuff and clearly all involved are having a ball.  In a way, all of us want to be Ray Peterson and all of us know an Art Weingartner.

With the movie recapped, let’s get down to talking Blu-Ray shop.  I’d almost forgotten what it’s like to get excited by a Blu-Ray release.  It’s just routine by now, if there’s a movie you want, chances are it’s already out or will get a bare bones release – or both.  The Burbs has a cult following and it seems that the powers that be noticed it and threw us a femur-sized bone.  First is the transfer itself, it was graded to director Joe Dante’s specifications on the baselight colour grading system at primes focus, London.  The film was then restored at Deluxe Digital, London, where thousands of artefacts and imperfections were removed with picture stabilisation added.  The end result, while not 100% perfect with certain scenes suffering from irreparable wear, is as close to perfect as you’re going to get.  It’s highly pleasing.

The supplements are equally impressive.  The 66 minute making of covers the movie from inception to legacy with director Joe Dante and several members of the cast speaking of their experience during the movie.  It’s jam packed with trivia and is brand new and also in HD- not some 4:6 DVD feature from many years prior.  Perhaps the most popular feature of this Blu-Ray release is going to be the workprint of the movie that is also included.  It is straight from Joe Dante’s own VHS collection and is a longer and alternate version of the movie.  It runs four minutes longer than the original movie yet also has alternate scenes, meaning you get more new footage than just four minutes.  There’s also a feature with commentary running alternate scenes side-by-side.  And for a 24 year old VHS rip, it’s in surprisingly good quality.

But there’s more.  The alternate ending is also remastered and in HD, as has the original theatrical trailer.  The audio that you will hear is the uncompressed PCM original, with commentary by writier Dana Olsen and moderated by Calum Waddell.  Throw in the must-have steelbook casing and to top it all off a collector’s booklet featuring writing by Kenneth J. Souza.

Call the pizza dude, because The Burbs on Blu-Ray, by Arrow Films and supervised by Joe Dante, is almost everything you could want.