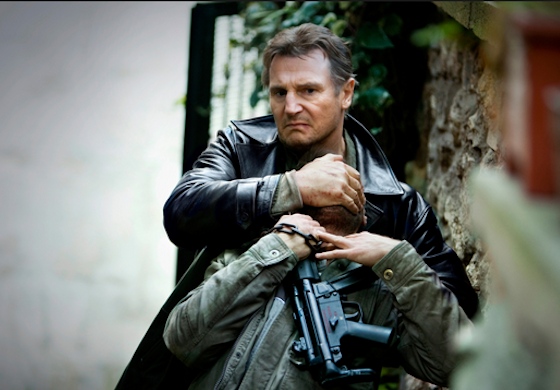 Liam Neeson has forged out an action career for himself.  The former boxing champion , even at age 62, is among the most sought after leading action men in Hollywood.  In fact he is almost typecast.  Neeson says: “My agent will suggest something and I’ll be outraged and exclaim, ‘No!’ Then he’ll tell me how much I get for the role. And I’ll do it,” he laughed to German magazine “TV Movie”.

At his age, Liam isn’t necessarily an obvious action hero or as agile as he used to be. But he’s grateful to still be working and offered all these parts.

“It’s a luxury I’m still working at this age,” he smiled. “The hero in action movies is usually mid-30s. I’ll send those scripts straight back, but a week later I’ll get a new one through and the main character is suddenly in his mid-50s.”

Liam will have two manly movies in the coming year.  Run All Night starring himself, RoboCop star Joel Kinnaman, Ed Harris and Nick Nolte, then, of course, Tak3n.  So the action future of Neeson continues.  Possibly drawing more ire from Steven Seagal, who recently remarked that Liam Neeson is not a real action star, that he cannot fight.