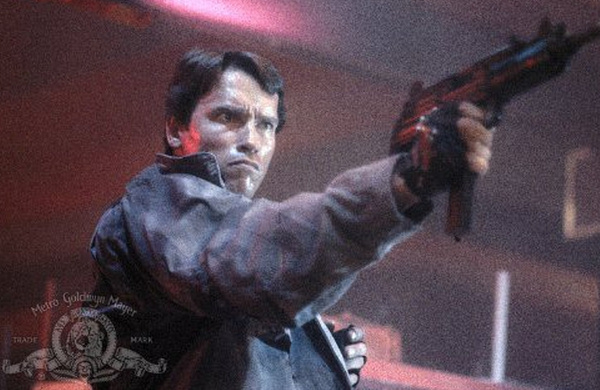 The trailer for a new Terminator movie is around the corner.  So that’s kind of a milestone event.  Twitter user @GBRIELGRY is in possession of the bootleg and unfinished version of the trailer.  Recently he uploaded screencaps from the video.  Today he has given some information and a detailed description of the trailer, which you can read below.  I won’t embed what he wrote, the last time we done that a cease and desist order came, the third of 2014 so far.

As for when this trailer comes, no idea.  But I’m going to ask someone later who probably does.  My guess is that it’ll be thrown up before Interstellar.  I wouldn’t be surprised to see Mad Max: Fury Road attach its trailer to that movie too.

The CGI Arnold Schwarzenegger/Flock of Seagulls T-800 is probably the most impressive CGI recreation of a human ever by the way, I actually thought it was from the original movie, however it isn’t.  Here’s the info on the trailer.

Okay I’m getting far too many questions and requests, I’ll tweet a more detailed description of the #TerminatorGenisys trailer in a moment.

Okay bear with me, the teaser for #TerminatorGenisys begins with a black screen. Industrial sounds and familiar music (Brad Fidel) …

.. VO: “There is no fate but what we make for ourselves.” Loud bwaaarrgghhh noise. Smash cut. Kyle, Connor running down a dark corridor…

.. A huge explosion, a quick shot of a HK centurion looming over a battlefield shooting up the battleground. A building shatters. Hard cut.

…Electricity sparks, Arnold 1984 uncoils and stands up. Camera wrap around. Over his shoulder, Arnold (grey hair approaches from distance)

…Shot of Kyle and Connor running down corridor, Kyle falls on his back and shoots an assault rifle. Connor turns shoots (something)…

…Vista of mass destruction in LA, people being shot by something off camera. Cut to black, Door gets kicked in. Arnold: “Sarah Connor.”

…Screen goes dark again. Smash cut a fleet of HK’s rise over a destroyed LA, a silver T1000 smashes through a large plate of glass.

… A T1000 with motorcycle helmet smashes a car windscreen and begins leaking through it… A shot of Sarah Connor screaming. Goes black.

…More music, then fade in Older Arnold opposite his younger naked self. He looks him over raises shotgun. Screen goes dark shot rings out.

The older T800 and Sarah Connor are in a chopper, she looks panicked, he turns to her and says. “I’ll” be back.” Then jumps out…

I’ve left a little out here and there, but that’s a more detailed gist. It’s pretty cool, and only one of a number under consideration.

This is the music used in the #TerminatorGenisys teaser. www.youtube.com/watch?v=XcNXq5DUZnk … With flourishes of course.

They also use an Eurythmics song too, a haunting cover of Sweet Dreams in one of the variants, strangely enough. Yes seriously!

I promise you, Arnold is still very much a badass; age be dammed.