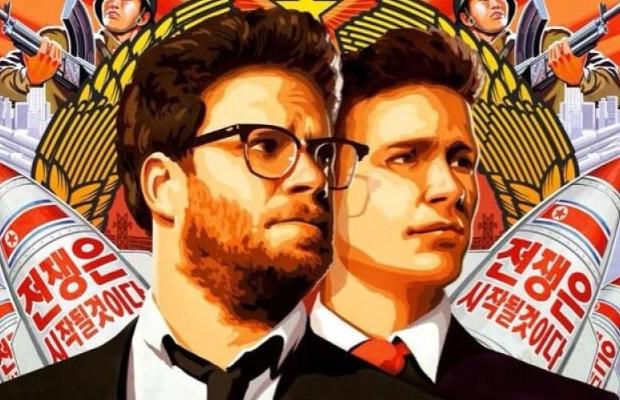 Runtime: 112 Mins
Rated: R
What To Expect: A film that seems like it was written by some 13 year olds who totally watched something about North Korea on YouTube

I won’t bother getting into the hacking scandal behind this movie.  Who cares at this point?  Old news.  Instead let’s just talk about the movie.  Turns out it’s not what I want out of a controversial political satire.  I want insight, wit and in the case of this one in particular, a good laugh at the absurdity of China’s caged commie Pitbull proxy state.  Instead, Seth Rogen and his buddy screenwriter Dan Sterling’s idea of political satire is dick jokes and white men yelling ebonics (‘dayum son!’ is not funny dialogue).  This is Dan Sterling’s first attempt at writing a movie.  He first cut his teeth on episodes of South Park, the tone of which is where this movie repeatedly goes – turd jokes, anyone?  Odd though, I remember actually laughing at South Park.

The movie sees a loud mouthed reporter (Franco) and his producer (Rogen) find that their show is adored by North Korean leader Kim Jong-Un, who invites them to his domain for an interview.  The CIA takes the opportunity to have them assassinate him and, of course, things go wrong.  The best review came from Sony themselves, ironically, from within their hacked emails: ‘desperately unfunny’.  Sony is in the business of making movies, therefore they know how to purchase good screenplays.  So why did they green light this  schlock?  They knew before any of us that it was going to be terrible even before the cameras rolled.  Aside from Dan Sterling being a shit story teller, Seth Rogen and James Franco are pretty damned bad actors, at least in this film.  So you gotta wonder too, how do these people get jobs?  How indeed.

Bill Murray.  That’s a name that came into my head while cringing at James Franco’s over acting, which by the way, really is insufferable.  Bill Murray, you see, is a man who could’ve made screenwriting hack Dan Sterling’s mess work.  He would’ve took the challenge and he would’ve delivered.  It would’ve called on his subtle and ironic comedic skills with a masterful ability to troll.  But Seth Rogen probably would’ve still ruined it, because aside from being untalented there are also only so many jokes I can take about Rogen’s fat anatomy, including his rectum – which you just know were included upon his insistence.And remember folks, this is supposed to be a witty political satire.

This is miles away from even Hot Shots: Part Deux, featuring Charlie Sheen (another man who could’ve made this work, maybe) vs that other dictator, Saddam Hussein.  And that was gratuitously a slapstick, yet somehow more intelligent.  And it is lightyears and entire Galaxies away from the likes of Wag The Dog.  Now there was a movie with effective and ballsy commentary and had the ability to make us laugh.  Here, literally the only thing of value are the visuals (i.e. millions) that Sony has invested to try and recreate the despot state.  Well, I suppose Randall Park plays a good Kim, for which I’ll give the score an extra point.  But this subtle play on the fat one is ruined by a yelling and irritating Rogen, Franco and their horrible fart jokes.

It’s Christmas and trust me, you’ll regret wasting two hours on this horse shit.  If I was Kim, I’d be pissed too.