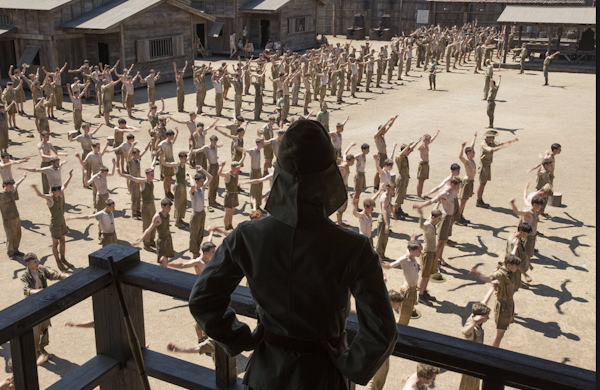 Runtime: 132 Mins
Rated: PG-13
What To Expect: Soulless amateur hour that wants to be timeless classic

Another war movie review today.  At least I consider this a war movie given that 80% of it is set in WW2, with writers and directors very keen to show us the behaviour of Japanese soldiers.  This is a movie by Angelina Jolie, her first role as director.  I am here to tell you that she can’t make a good movie.  Females can make good movies, occasionally, look at Katherine Bigelow (Point Break, the original, not the remake).  But Angelina Jolie can’t.  So if it was perplexing that a greenhorn female actress should be given a budget of $65 million to make a movie right out the door, it’ll damn sure be perplexing if they let her do it again, now that this movie has both failed commercially and critically.  It’s not what you know…

Based on the true story, an Italian American Olympic athlete, Louie Zamperini (Jack O’Connell), goes ahead to do his duty in WW2 serving with the USAF in the pacific.  His plane gets shot down then he must survive the dual ordeal of staling alive in a lifeboat in the middle of the pacific (in the middle of the war) then surviving a term as a prisoner of war under screaming lunatic Japanese soldiers.

This film is unbelievably rigid.  It has a sequence of events with O’Connell at duress just thrown together.  Practically the only thing Jolie got right was the order in which they were supposed to come and even then, the editor can probably take credit for that.  They just showed up, shots scenes at places that look like they were written in the book, left, went to the next location and gave them to post-production.  They couldn’t put a little character in it?  I kept thinking to myself, man, that POW movie with Christian Bale (Rescue Dawn) kicks the shit out of this wooden bore-fest.  At least the characters in that movie related to each other, hell at least they talked to each other.

Angelina Jolie’s idea of a season ruthless guard in Japan, 8 years into a war.  Yes I double checked the pic

The second half of the movie is the real problem though, when Zamperini is taken prisoner.  The commandant of his camp takes a particular disliking to Zamperini, probably recognising him as a star athlete – I say probably because the movie doesn’t bother giving us much substance for anything.  This commandant is supposed to be tough, evil and gnarly.  So why is there a Japanese pretty-boy (who sometimes looks like a lesbian) cast in the role and giving a terrible performance?  The guy looks like he’s from an aftershave commercial, actually on Googling him he’s a rock star.  Aged 33 with Japan at war for eight years, this man looks like a manicured bitch?  Jolie flew to Tokyo because she insisted there was nobody else who could fill the role.  At first he declined because he considered the character a caricature (it really is) and that his fellow Japs would ridicule him, but Jolie somehow sold him the idea.  Mistake, with director at fault.

Aside from being completely ineffective as a ruthless antagonist, miles away from, say, Steven Berkoff’s Lt. Col in Rambo II, the character is ridiculously OTT and is absolutely a caricature.  I know that the Japanese were the worst as far as WW2 POW treatment goes, savages even some might say, but this character is badly written with a torture fetish, with an actor who couldn’t bring him to life even if it was well written.  At least give the man some depth, or something.  Worse, despite this torture fetish the movie is PG-13, so you have a ruthless commandant, but not so ruthless as to offend some minors.  Wat.

The Coen Brothers wrote this movie.  Their worst writing since The Ladykillers.  It’s just Jack O’Connell getting roughed up, PG-13 style in the jungle.  Then roughed up PG-13 style in a coal mine, and so forth.  Zero character relations, no empathy with the victim… just some nice $65 million dollar production values to look at.

Here’s the bottom line – Angelina Jolie didn’t get it, the Coens didn’t care.