[REVIEW] Grizzly (2015) Is Let Down By Dr. Phil Melodrama – ManlyMovie 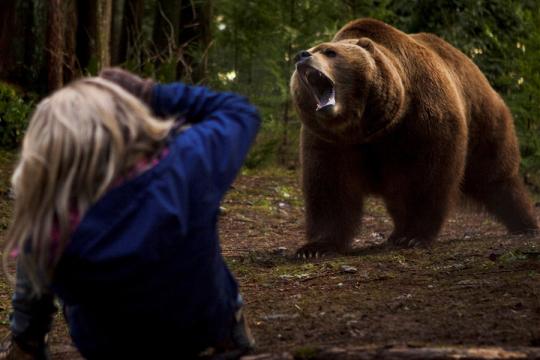 Runtime: 93 Mins
Rated: R
What To Expect: Good work from a real acting bear is let down by tedious melodrama

You should always give man vs. beast movies a chance.  We all know that, it’s obligatory.  Especially when it features the likes of Scott Glenn and a bespectacled Billy Bob Thornton as an expert beast slayer who roams the backwoods in a trench coat with a flask and rifle.  This is the same kind of movie as The Grey in a way, where Liam Neeson and Frank Grillo were stalked by killer wolves.  The difference is there is a bear, obviously, in ‘Grizzly’.  Good concept for sure for manly movies, but it’s kinda let down by a bout of melodrama and soap opera.

After being pushed just a bit too far by poachers, a collossal grizzly bear goes apeshit and embarks on a homicidal rage, out to kill any human within sight or smell.  The bear by the way is played by Bart II, or Bart the Bear Jr., the successor to the legendary Bart the Bear, referred to by the director of ‘The Edge’ as the ‘John Wayne of bears’.  Anyway, James Marsden is an  ex con returning to his hometown while all of this has broken out, and his Sheriff brother Thomas Jane, both estranged from each other, resents Marsden’s involvement with taking out the killer beast.

The best thing about this movie for sure is Bart II.  That thing is fucking fearsome and an incredible animal actor, he’s genuinely a scary antagonist.  Even better, there is some highly impressive stunt work put in by Bart the Bear II, such as his wrestling of humans without actually hurting them.  That’s impressive work by both the animal and his trainers, not to mention the stuntmen on the receiving end of it.  I was very impressed by this and the fact they didn’t resort to CGI (for the bear, the blood on the other hand…).  Billy Bob Thornton plays the eccentric hunter superbly as well, like Robert Shaw’s Quint in Jaws, but not really on the same level.

I’d give this movie a six out of ten though and not any higher, because Marsden and Jane’s tiff starts to drag the movie down.  There’s a lot of angst in there that really doesn’t belong, especially when a bear the size of a tank wants to maul you and your crew to death.  The likes of The Grey had more pace and menace about it,  whereas in Grizzly there seems be a lot of wandering aimlessly in a forest, with a lot of bitching.  Oh well, at least it looks really good, the cinematography is outstanding for the size of the movie.  I’d also have to say I laughed way more than was probably intended.

While the end fight with the beast picks the movie up a little bit and the violence is savage, Grizzly is nothing to write home about.