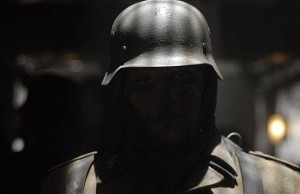 They say war is hell, and this age-old cliché has been exemplified in pretty much every war picture to date. 2008’s Outpost is a film which literalises this adage, incorporating the horrors of war into a traditional horror picture. Every now and again, a small-time, low-budget horror film comes out of nowhere to catch genre fans off-guard with an unexpected magnum opus. Films like Dog Soldiers immediately come to mind as a good illustration of this, delivering the sort of horror experience that we don’t see often enough. Happily, director Steve Barker’s Outpost is another one of these movies. In terms of story and ideas, this is not particularly groundbreaking flick (even the DVD cover openly identifies films it shares similarities with), but it is a badass horror/action gem which competently accomplishes everything that a good horror film ought to accomplish.

In the picture’s opening moments, career soldier-of-fortune DC (Ray Stevenson) is hired by corporate engineer Hunt (Julian Wadham) to assemble a team of mercenaries. Their assignment is to protect Hunt as he travels into an Eastern European civil war zone to conduct a mineralogical survey on property recently acquired by his employers. During their travels they stumble upon a dilapidated, seemingly abandoned old bunker, which, as it turns out, belonged to the Nazis during World War II. Investigation soon reveals that the Nazis used the bunker for brutal experiments blending the occult with science, resulting in a legion of marauding Nazi zombie apparitions who begin stalking and killing the mercenaries. Before long, DC and his men are engaged in a dangerous conflict against an unstoppable enemy.

Running at a hair under 85 minutes and forgoing unnecessary fluff, Outpost is exceedingly taut. The characters and their goals are briskly established in a masterfully efficient opening segment before the film’s meat and potatoes elements begin to appear, with scares, intoxicating build-ups of tension, and an apprehensive atmosphere. It doesn’t take long for the characters to realise that there’s something amiss about the bunker, and likewise it isn’t long before the men learn that their client has been misleading about his true motives. It’s a shame, though, that the film feels a tad underdone – more could have been done in terms of character development and exploring the mythology behind the Nazi zombies. Oh well, at least there’s leeway for sequels to further explore aspects of the mythology.

Most contemporary horror films are predominantly concerned with gory kills, but director Steve Barker chose to rely mainly on atmosphere rather than cheap shocks and predictable jump scares. While helpless victims are slaughtered here, Outpost‘s mercenaries feel like the real deal rather than dumb knife fodder, and their operational skills show that they are experienced professionals. Additionally, the question of “Why don’t these idiots just leave?” is addressed early into the action, allowing the mercs to be believably trapped in an unenviable situation with no easy escape.

Luckily, despite a low budget, Rae Brunton’s superlative screenplay was competently transferred to the screen. Outpost is insanely creepy and atmospheric, and Gavin Struthers’ cinematography is a huge help in this regard. Most of the proceedings take place within the tiny Nazi bunker, lending a claustrophobic feel to the grimy interiors. The photography is also desaturated to the point of near monochrome, allowing the film to feel more insidious and chilling. Furthermore, the lighting techniques are to be commended. In fact, Outpost should be screened in film school to provide a crash course on how to light scenes for maximum effect. The soundscape is equally outstanding, from the haunting melodies composed by James Brett to the eerie ambient noises of the film’s key locations.

Character development is somewhat lightweight here, yet each of the mercenaries were imbued with distinctive characterisations to ensure that none of them become interchangeable victims amid the blood-letting. As an added bonus, the mercenaries were portrayed by a charismatic bunch of badasses who genuinely look like hardened soldiers. In the main role of DC is Ray Stevenson, who featured in the television series Rome as well as 2008’s Punisher: War Zone. As the tough-as-nails leader of this hardened crew, Stevenson is effortlessly badass. Beside him, in the role of Hunt, Julian Wadham is constantly believable and intense. All of the actors truly disappeared into their roles – indeed, when you look at Michael Smiley you will not think of his role in the TV series Spaced. Most horror movies falter in the acting department, but Outpost is positively and comprehensively faultless.