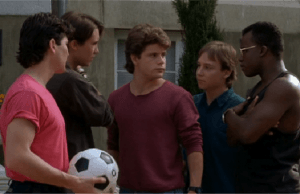 It’s an overused analogy, but 1991’s Toy Soldiers is fundamentally an amalgam of Die Hard, The Goonies and Red Dawn, making kids and teenagers the heroes of an adult premise. By no means is this a groundbreaking or Oscar-worthy gem, but it is a terrific popcorn flick, delivering easy-going entertainment, exciting action sequences, and some nail-biting suspense. It’s one of those movies that you watch on a rainy day with a big bowl of popcorn and a handful of friends. And the fact that it’s not marred by a lot of the usual pitfalls of modern action films makes Toy Soldiers even better. It’s not on the same level as Die Hard, but nothing much is.

Notorious troublemaker Billy Tepper (Sean Astin) has been expelled from a number of educational institutions, and winds up at the Regis School in Virginia, where powerful American families send their delinquent offspring. Tepper and his band of misfits (including Keith Coogan, Wil Wheaton, T.E. Russell and George Perez) consistently cause headaches for the school’s dean (Louis Gossett Jr.) and headmaster (Denholm Elliott). However, the boys’ courage is put to the test when the school is violently taken over by a group of terrorists, led by the ruthless Luis Cali (Ander Divoff). Cali takes the kids hostage, demanding for the American government to release his father from prison. Not surprisingly, Tepper and his rebellious pals are not willing to sit back and do nothing.

Written by David Koepp (Jurassic Park) and directed by Daniel Petrie Jr., Toy Soldiers is skilfully structured and well-written for what’s essentially junk food cinema. Similar to Die Hard, the terrorist takeover of the school does not occur until about thirty minutes into the film’s almost two-hour runtime, permitting scenes of valuable character development. And the protagonists react to the terrorist takeover in a completely naturalistic fashion, showing smarts and innovation, but they are also not shown to be invincible. Admittedly, Toy Soldiers is a little ridiculous at times, leaning on typical Hollywood chestnuts like split-second timing, and simplifying a few narrative aspects. And then there’s the fact that the military and the kids simultaneously stage an attack against the terrorists, even though they cannot communicate properly and both parties would be screwed without the cooperation of the other. Still, none of this stuff is overly bothersome.

Even though Toy Soldiers is more or less a film for kids and teens, it is R-rated, which has sparked negative reaction among critics. Petrie does not shy away from the inherent violence of the story, with gunshot wounds yielding visibly bloody holes, and with the characters swearing on a constant basis. Honestly, though, the R rating is what gives Toy Soldiers its colour – kiddie movies are often sanitised to a fault, which can be detrimental as kids will not grasp the consequences of violence. The movie is dark at times, but it all comes with the territory for this type of story. It also helps that Toy Soldiers is so proficiently mounted, balancing its darker moments with light-hearted humour and good-natured scenes of the main characters giving the terrorists their comeuppance. Production values are strong all-round, with attractive cinematography by Thomas Burstyn and smooth editing courtesy of frequent Steven Spielberg collaborator Michael Kahn.

Toy Soldiers also works as well as it does thanks to the exceptional cast. Leading the pack is Astin, who had appeared in The Goonies a few years prior, and who was many years away from his turn in Peter Jackson’s Lord of the Rings trilogy. Astin is a charming, funny smartass here, and makes for a great hero despite his youth. The rest of the boys are just as good, sharing terrific camaraderie and selling their friendships. The acting standout, however, is Louis Gossett Jr., who’s a witty and charismatic presence as the strict but fair dean. Indiana Jones co-star Denholm Elliott is predictably good as well, coming across as a warm and level-headed headmaster, while Divoff is nicely menacing as the resident villain.

When it comes down to it, Toy Soldiers is essentially a hodgepodge of several other action movies, and there are not many original bones in its cinematic body. Nevertheless, it remains an entertaining flick. Some may question how appropriate it is for children, but it became popular with young folks anyway. Besides, the violence here is on the same level as Raiders of the Lost Ark and Red Dawn, and those movies are childhood classics. Moreover, the movie still plays well when you’re an adult, which is what matters the most. It’s just good fun.

Released in the UK by 101 Films, this Blu-ray arrives as part of the “Cult Movie Collection” label. Toy Soldiers comes to HD with a fair, but could’ve-been-better video transfer. The print is in fine shape with only occasional instances of wear & tear, but it’s encoded in MPEG-2 for whatever reason, as opposed to a more reasonable MPEG-4. Unfortunately, this is a barebones Blu-ray, offering nothing except the movie and chapter selections, which makes the so-so video transfer more disappointing since it had a whole 25GB disc devoted to it. Still, this is a nicely detailed video presentation. It’s certainly watchable, and a big step up from the DVD. At least it’s not a lazy SD up-convert, and there doesn’t seem to be any annoying digital manipulation at play here.

The audio track, meanwhile, is a robust DTS-HD Master Audio 2.0. It definitely does its job well enough, with booming gunshots and clear audio. If you’re feeling adventurous, you can go for the German Blu-ray, which has an MPEG-4 encoded video presentation and a 7.1 HD audio track. I cannot comment on the quality of either, but let us know if you ever feel like dropping the $70 it’ll take to import the sucker.

Bottom line? A great little flick on a decent Blu-ray. It’s worth owning despite the lack of extras.