Van Damme Vs Seagal: Who Is Bigger? - ManlyMovie

Home / Editorial / Van Damme Vs Seagal: Who Is Bigger?

Van Damme Vs Seagal: Who Is Bigger? 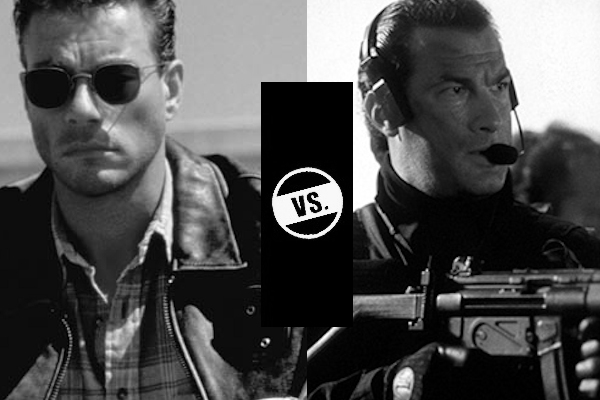 Like Sly vs.Arnie, Seagal’s main rival was Van Damme and Van Damme’s main rival was Seagal. Neither quite broke the ‘A-List Action Man’ ceiling. Largely down to both having self destructive egos. Going into this, only movies will be taken into account and their effectiveness by themselves, box office won’t be taken into account and each man will have half-decade ’bouts’ where the number of quality movies will determine a winner or a tie, with the winner coming from the sum of each decade. Off-screen shenanigans won’t be accounted for – I think we can give old Seagal a break today…

This one starts off lopsided, with Van Damme’s career beginning in earnest before Seagal’s. Van Damme has more movies in general, with four of them being ‘good’: Bloodsport (1987), Kickboxer (1989), Death Warrant (1990) and Lionheart (1990). Seagal only manages to get three movies out, Above The Law (1988), Hard To Kill (1990) and Marked For Death (1990), but all three of them are good movies. Bottom line is, though, that Van Damme has four quality movies but also backs them up with lesser movies such as No Retreat, No Surrender (1986) – quite frankly an amazing (unintentional) comed/drinking movie, Black Eagle (1988) and Cyborg (1989).

We’re into the swansong era of manly action now. This is where all real action stars, A-List, B-List and below, had their last hurrah before liberalist rot set in. Including Seagal and Van Damme, though I firmly believe these two had the power to actually forcibly keep the genre alive, had their ego’s not got the better of them. Anyway, Seagal again comes out with less movies, but again all of them are good. Out For Justice (1991), Under Siege (1992), On Deadly Ground (1994) and Under Siege 2 (1995). However Van Damme not only comes out with more movies, but a higher volume of quality also. Double Impact (1991), Universal Soldier (1992), Nowhere To Run (1993), Hard Target (1993), TimeCop (1994) and Sudden Death (1995). Van Damme easily outpaces Seagal.

1996 seemed to be the death knell for 80s/90s action, or at leas the beginning of it. The next five years would take no prisoners, not even Stallone or Schwarzenegger, so Van Damme and Seagal were no exceptions. They did get some nice movies out though. Seagal starts strong with Executive Decision and The Glimmer Man (1996), following up with Fire Down Below (1997) – just barely a good movie, then disappears into DTV hell forevermore. Van Damme though gets only two good movies out. Maximum Risk and The Quest (1996). Some may argue Double Team (1997) qualifies, but it’s just not a good movie. Van Damme, like Seagal, slides into DTV hell. An attempt to rejuvenate his career with Universal Soldier 2 (1999) fails, the movie is both a turd and financial bomb. It would be his last theatrical run for many years.

By 2000 the action landscape had changed considerably. All of our favorite stars were struggling not only to draw money, but to produce good movies at all. Only Schwarzenegger had moderate financial success with Terminator 3, but that was still a turd. Van Damme and Seagal could each only produce one ‘good’ movie each in this period. For Seagal it was Exit Wounds (2001), even touted at the time as a comeback. For Van Damme it was In Hell (2003), a DTV fighting movie. Aside from those, it was take your pick from DTV horseshit. Something Seagal has an edge on through sheer hilarity, filling out the ‘so bad it’s good’ category. Van Damme’s were seriously depressing. In the end though, it’s narrowly a tie, with Seagal just missing being the better star.

By the mid-00s things were depressing indeed. Sly was quiet, Arnold was massaging his own ego by trying to take over the USA and Van Damme and Seagal showed no signs of leaving DTV hell. Further in, there’s a slight pick up. Van Damme comes out of left field with JCVD (2008). Not really an action movie, but a good movie nonetheless. Van Damme follows this up with the brutal Universal Soldier: Regeneration (2009), possibly the best DTV ever made. Seagal again is trailing, but does manage to get a big one in at the end with Machete (2010) and his own TV show, Lawman (2009). Seagal nudges it to make it a tie.

And now we enter the present. Possibly a more vital time for Seagal as he’s older than Van Damme and may need to choose more wisely. But it seems that it’s Van Damme who is doing that. Seagal, thus far, has had nothing to offer. He turned down The Expendables 2, and he turned down The Expendables 3. Van Damme made a similar mistake, but learned his lesson and accepted a role in The Expendables 2 (2012), this was after he had his own excellent TV show, Behind Closed Doors (2011). Van Damme also has two probable, albeit DTV, winners. Enemies Closer (2013) and Swelter (2014). So Van Damme wins the present and seemingly the future, with Seagal both offering nothing and running out of gas.

Van Damme, between these two rivals, is and was the bigger star. Even on a financial level, Van Damme drew more money. At the box office he drew $780 million, or $1.6 billion if including both the ensembles Kung Fu Panda 2 (2011) and Expendables 2 (2012). Seagal’s box office draw was a total of $584 million or $729 million if including the ensembles Executive Decision (1996) and Machete (2010). At the end of the day, personally, I enjoy the movies of both and again put only their movies against each other, leaving all else that happened off screen (Seagal would lose in that department, too) out of the equation.  Seagal’s best hope now is his alleged theatrical return with Cypher, a long-shot might be that it ignites and final wind for him…