What If The Expendables 3 Was Made In The ’90s? – ManlyMovie

What If The Expendables 3 Was Made In The ’90s? 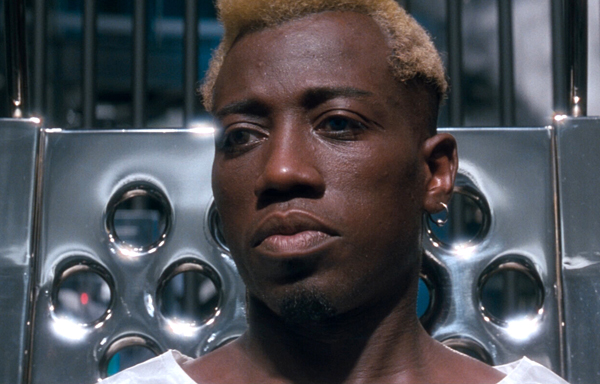 Let’s face it, The Expendables 3 is a ’90s get-together. A throwback, a celebration. That’s why it has even less of a plot than most action movies. It’s a whose who of who was.  It would’ve been more than a wet-dream for this to have appeared in the ’90s. Let’s say, when each of the main actors was at his peak and for the sake of averages – 1995. It probably would not have been possible because of the sheer cost of casting it, but probably moreso because of the sheer strength of egos. I admit it, the formulae below are crude, I’m taking salaries and typical box-office return per big name and adding them up. Now obviously not every Stallone fan was a Gibson fan and vice-versa, etc.  Some might think I’m being too optimistic, so I’m going to try and compensate by removing residual star power (sorry Dolph and TMoney, that means you). I think it would’ve passed the billion mark but, as someone who remembers the ’90s this might even be a severe under-estimation (my budget is probably far too small too). I mean, who knows what kind of numbers this thing would’ve made. But anyway, onto bare minimums…

How much would it have cost?

The cast is Mel Gibson, Arnold Schwarzenegger, Sylvester Stallone and Wesley Snipes.  Not to mention Harrison Ford. Let’s start with the big one: Arnie. Arnie was the highest paid out of these actors circa 1995 with a salary for Eraser being $20,000,000, Mel is a close second with pretty much the same typical salary. Second is Stallone with salary for Judge Dredd being $15,000,000.  Harrison Ford was in a somewhat similar league to Stallone back then, earnings wise.  Snipes could’ve possibly demanded $10,000,000.  Again these are rough numbers, possibly off by one or two.  Let’s expect salary cuts too, back end deals and such as is common with ensembles.

Even before adjusting for inflation, the casting budget has already almost matched The Expendables 3’s entire budget (real budget was circa 60-70,000,000). So now the movie is cast, there’s the little matter of shooting it, casting other actors (remember that on top of Lundgren etc, Crews and Couture must be replaced) etc. Shooting it in Eastern Europe is not an option, a lot of war was still raging there in the ’90s. America would be the probable location. The likes of Die Hard with a Vengeance alone had a sole budget of 90,000,000. For an investment like this, the only way to go is all the way in order to ensure it turns a profit. I’d guess that the budget would’ve been around 200,000,000. You also have to consider the price of ego. Encouraging each man to come on board would probably drive prices up beyond their normal salary. It would be a fine line making sure no one is man ahead of the other.

How much would it have made?

Again, to keep variables down I’ll ignore the chance, for example, that it drew in an even larger audience due to riveting acting or whatever. It’s easier to over-estimate than under-estimate things. So we’ll just go the crude way and take the big names’ drawing power. Rounded. Starting with Arnie, True Lies pulled a massive $380,000,000. Next, Judge Dredd for Stallone pulled $115,000,000. The likes of Ransom, with Mel: $309,000,000.  Ford’s Clear and Present Danger netted a hefty $200,000,000 while Snipes’ Money Train around this time drew $70,000,000. These are, of course, international numbers. Like I said, not every fan of each guy is a fan of others. But on the other hand, like Stallone said recently, there’s strength in numbers. You can multiply that even further considering this would’ve been the ’90s. It would’ve been the equivalent of taking Batman and Superman with Bale and Cavill, and throwing them into The Avengers II. I actually think it would be fair to add an additional $100,000,000. Remember, just two years later Titanic had already busted the billion mark, so this kind of number wasn’t new to the ’90s.

A slightly more ’90s’ take on an EX3 trailer

Who could’ve directed it?

I mean, it’s a great idea.  But a scary one.  If it’s 1995 and you pitch something as outrageous as this to even the A-list directors, they’d probably run up the side of a hill. I think the list would be narrowed pretty quickly down to the extremely ballsy, extremely talented but also extremely batshit.  Mel might have listened, but he was caught up with Braveheart and that took a lot out of him.  My second thought would be that somebody would approach John Woo and that the man would be crazy enough to do something stupid, like saying yes.  Now there’s a pant-shitting thought, John Woo directing this ensemble in the mid 1990s.

Other possible scenarios, Arnold Schwarzenegger convinces John McTiernan to step up to the plate.  After all, we’re talking about the director of Predator here, and Arnold might just get inside his head.  On the downside, there’s the ugly possibility that somebody like Paul W.S. Anderson is hired, just getting started around the time in the big leagues.  Now his 1990s movies weren’t so bad, but if he directed this and fucked it up, he’d probably literally have to leave planet earth because not even his corpse would’ve been safe.

The problem is there’s a killer amount of egos on one set here.  I’m sure the first thing they would’ve collectively demanded would’ve been no shitty underlings like Rousey or her 1990’s equal hogging screen time.  But assuming it worked out and everyone played ball, the results would’ve been unimaginable.  The hype generated currently by Batman Vs. Superman would’ve paled in comparison.  The inclusion of Schwarzenegger and Stallone alone would’ve shaken the earth to the core.  It would’ve also have been R-rated, probably hard R depending on the director.  I also think it would’ve given the old violent action era a second wind, pushing it up to 2000 and beyond.  And it might have gotten so big that others would’ve wanted in on the action.  Sponsorship deals by famous musicians etc.

It would have been, simply put, the greatest fucking thing ever.