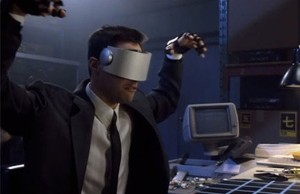 A cyberpunk action flick, Johnny Mnemonic is based on William Gibson’s short story of the same name. To the credit of Johnny Mnemonic‘s producers, they recruited Gibson to adapt his own story into a full-length screenplay, which in theory should’ve been the catalyst for a successful page-to-screen translation. Alas, the ensuing feature is a jumble of clichés, terrible dialogue, crackpot ideas and lethally uninspired craftsmanship. This was the first feature film for both Gibson and director Robert Longo (an artist who’d dabbled in music videos), and their inexperience is blatantly obvious. Lacking in heart, soul and intelligence, Johnny Mnemonic is a train wreck of cataclysmic proportions if viewed as a serious science fiction movie. However, if you perceive the film as a campy, comedic ’90s cyberpunk action movie, this is a home run. Damn cheesy and irresistibly hilarious, this is the reason why the term “guilty pleasure” was invented.

Set in 2021, Johnny (Keanu Reeves) is a Mnemonic courier possessing a brain implant capable of storing electronic data, making him ideal for black market information transferral. His storage capacity is 80GB, but can be extended to 160GB with the help of a ‘doubler’ (in an age of 2TB external hard-drives, think about how hilarious this notion is). Johnny wants to quit the business, but is told he must complete one final job (oh, it’s one of those plots). Despite the job requiring the transfer of a 320GB file, Johnny agrees. Problem is, such an overload is guaranteed to cause ‘seepage’, wherein the content leaks into his regular brain and cripples his cortex. Johnny has less than 24 hours to remove the data from his brain before he dies. Further complicating matters is a bunch of yakuza gangsters who are also determined to obtain the data. Also thrown into the mix is the most ridiculous bounty hunter ever: a Street Preacher (Dolph Lundgren) who wears a robe and carries a staff, and who smites both sinners and people with a price on their heads. Fortunately for Johnny, he happens upon Jane (Dina Meyer), who has conveniently-placed friends in high places who can help.

In a decade which bore the release of The Matrix and Twelve Monkeys among others, Johnny Mnemonic is definitely one of the lesser sci-fi films of the ’90s. Clearly, the makers of Johnny Mnemonic set out to craft a Blade Runner for the ’90s, using esteemed author William Gibson’s interpretation of the future and rapidly-advancing technology to give the impression of smarts. The main problem, though, is the dumb as rocks script. Just because the film takes place in a futuristic setting does not mean that all logic and coherence should be discarded. I mean, why store data in the brain when a portable hard-drive would easily suffice? All of the stored data can be accessed by chopping the courier’s head off, after all. The dialogue, meanwhile, is amazingly cheesy and unbelievably terrible. Fortunately, Johnny Mnemonic is ridiculously goofy and outright bad enough to be fun, even if it’s not a good film at all. The production values are amazingly campy, with “futuristic” sets and effects that often look very cheap – the film looks closer to Mad Max than Blade Runner.

Made in 1995, Johnny Mnemonic remains an interesting document due to its laughable vision of 2021. For a film that pondered the near-future, it is already hilariously wrong in 2015. For instance, in ten years from now, do you think a big bulky desktop computer will be essential for accessing the internet? And do not make me bring up the aforementioned discussion of memory sizes. Just don’t do it. Meanwhile, Johnny Mnemonic‘s vision of the future of the internet is ludicrous; a Tron-inspired virtual reality interface constructed with CGI that looks primitive all these years on, though its out-datedness admittedly makes it look nifty. Oh, and there is a scene featuring a cyborg dolphin floating in a glowing green tank. If this stuff doesn’t get you laughing uncontrollably, nothing will. Interestingly, in one scene, the titular main character asks for a “Thompson iPhone”. It’s a complete coincidence, of course, but you’ll probably rewind the film and do a double take.

With Keanu Reeves in the title role, Johnny Mnemonic can be perceived as sci-fi practice for the star before his success in the much superior The Matrix four years later. (Incredibly, Reeves here plays a character who wears a simple black suit and a straight tie who is known to his clients as Mr. Smith…) In all likelihood, all of the actors here were told they were making a comedy. Reeves is downright side-splitting in the title role thanks to his overacting and ridiculously hammy line readings. (And does anyone else see the innate humour in the notion of Reeves’ brain being overloaded beyond its full capacity?) Alongside Reeves, in her theatrical film debut, Dina Meyer (Starship Troopers) is awful in every frame, but hilariously so. And then there’s rapper-turned-actor Ice-T sporting facial tattoos, dreadlocks and a pair of ski goggles. You cannot make this stuff up. Rounding out the most notable players is Dolph Lundgren playing a bearded, homicidal preacher-come-assassin wearing Jesus robes and sporting a large beard, and who at one stage announces his presence by bursting into a room behind a gurney on which lies a woman who was stabbed through the heart with a crucifix. Dolph’s dead-eyed, monotone acting is abysmal to the point of hilarity, and he’s an absolute scene-stealer. With the actors filling their lines with false, forced intensity, there are a lot of unintentional laughs to be had.

At no point can anyone consider Johnny Mnemonic (Johnny Moronic?) a good or even a decent film, but it has its fair share of cult movie charms, from its cheap-looking sets to the old hat CGI to the surfeit of bad acting (I’m never going to grow sick of Dolph Lundgren waving his staff around). Over-the-top and deliciously hammy, this is an irresistibly fun movie lacking in drama, tension and logic that tries to be intelligent – it’s like a mentally challenged person trying to use big words in a bid to sound smart but just comes off as even more moronic instead. It’s tough not to like this film on some juvenile level due to how awesomely terrible it is, so watch it with copious amounts of alcohol when you wish to give your brain a rest.

As a serious movie?

As a campy piece of unintentional hilarity?