[REVIEW] When Trumpets Fade (1998) The Most Underrated War Movie Ever 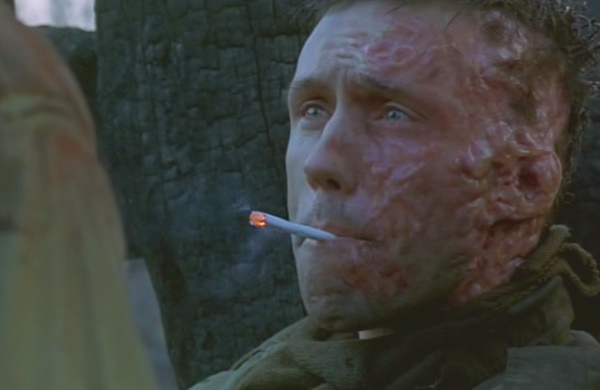 Runtime: 95 Mins
Rated: R
What To Expect: The best war movie in 25 years?
This movie took me by surprise, to say the least.  When I first watched it I was still thinking about it the next day – that doesn’t happen often.  I don’t think I’ve ever seen a war movie quite like it. I think it’s one of the top five best war movies I’ve ever seen, possibly the best war movie in 25 years.  What is it?  It’s a sleeper, a HBO TV movie from the director of Raw Deal (1986).  Released in 1998 and buried by the hype of Spielberg’s WW2 flick, here’s a movie that is at least that movie’s equal.  It’s probably superior, it certainly makes the former look almost juvenile.  What is so good about it?  It pulls absolutely, positively no punches at all.  Its realism is such that I get the feeling Band of Brothers tried top copy it, but didn’t have the balls to.
Finally, a war movie that almost lets you peer into history itself and all the nastiness that came with it, rather than a pompous award-chasing project.  This movie throws studio inhibition in the toilet, like the patriotism that dies in its story. (fading trumpets).  And in that regard?  A movie like that is not fit for the box office.
This movie is about the Battle of Hurtgen Forest, one of the worst, if not the most hellish battles of the Western Front.  To put it in perspective, the Americans lost twice as many men in Hurtgen Forest than all of the combined Allied losses at D-Day.  It follows an NCO Sgt. with a difference.  Part Bob Barnes (Platoon), part Tony Soprano, this is Cpt. Winters’ cold, dark alter-ego and the man Spielberg was afraid to put in his movie/series.  He’s an excellent soldier, but he’s no Tom Hanks, the affable teacher who had a comparative walk in the park in SVP.  The directness, almost indifference, in which he executes his own men (note: plural, but in the context of the movie, necessary) is refreshingly realistic to a degree never seen in war movies.  To such an extent where I get the feeling whoever wrote the screenplay wrote it so directly (yet expertly) that he probably considered that it would never be filmed.  And yet HBO picked it up.  This is a real picture of the Western Allied line in 1944.
The story is about a Sgt. (described above) in the midst of hell on earth who, like many of the men on screen,  has had his soul removed and now will do anything to get out.  Instead, he’s given a platoon of new recruits and sent back to the front.  By this point, there are no heroes, only men who despise each other carrying out orders in hope of getting leave.  Between the officers in particular, things are at breaking point.  At least three times in this movie, they threaten to kill each other.  And the actors (Eldard, Olyphant, Donovan), so amazing yet understated, sell it completely.  Don’t be fooled by Irvin’s cartoonish turn in ‘Raw Deal’ either, this is as mature a war movie as you’ll ever see, it doesn’t really need violence that much (which is gruesome and well directed when it comes), instead it relies on its ingenuous character relations, acting and writing.  In other words, the kind of thing too many war movies try to do and fail at.
This is a borderline taboo movie.  You want to see what WW2 did to a man when the shit really hit the fan, check out this classic, which many big productions since have shamelessly stolen from yet imitated so sheepishly.  Bravo.