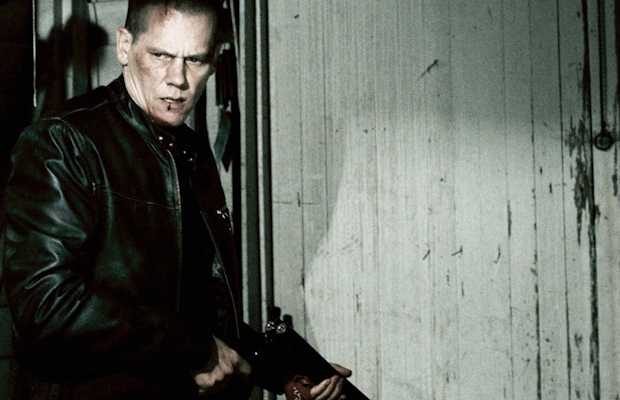 Ever notice how Kevin Bacon repeatedly plays some form of sex offender?  In Murder in the First, he sexually accosts a woman (albeit briefly).  In Sleepers he is a pedophile.  In Hollow Man, he is a rapist.  In Mystic River he sides with a paedophile and lets him walk free.  In The Woodsman, he is again, you guessed it, a pedophile.  In ‘Trapped‘, he kidnaps a little girl and sexually assaults her mother.  I’m pretty sure he does the same thing in The River Wild when he kidnaps another woman, and her child.  And these are only from Bacon movies I’ve seen.  But here, it’s hard not to like even Bacon, because this is a genre that is hard to fuck up: Revenge.  When a kid gets gunned down in a store, his old man goes berserk and goes on a bloodbath rampage.  Get ’em, Bacon!

So Bacon’s hot-shot son in murdered during a gang initiation.  Bacon is pissed when he hears the killer won’t serve any real time then refuses to testify so that he can murder him himself.  Good call, Bacon. And so begins tit-for-tat with each act of violence escalating.  It’s a simple but cool concept.  We like to see vermin get punished, the more violent the reprisal the better.  Death Wish was savvy enough to know that this works better the more you hate the bad guys.  Scum would be a good way to describe these bad guys, in fact this whole movie has a veneer of intangible ‘scum’ over it.  Charles Bronson made a career out of this type of movie.  Ever wonder what a modern day Death Wish would look like?  Well this is its seedy, disturbed grandson.  It’s a rough movie, in line with ‘Running Scared’ with Paul Walker.  It’s actually a tight little thriller too – not a bad movie, so the fact it was so critically shat on should suggest how rough it actually is.

Someone somewhere thought it would be a good idea to have the director of SAW handle a revenge/vigilante thriller.  Well, that was a good idea.  The director clearly gets off on stabbings, shootings and … more stabbings and shootings.  Even the lighter moments in this film are dark.  The opening sequence that is supposed to show a happy family environment is shot like some Jig-Saw candid footage, it’s creepy and morbid.  In Death Sentence, John Goodman (great cameo) is only too ready to kill his own son, and the son only too ready to kill him.  That’s how cheerful this movie is.  Eventually, Bacon goes completely batshit, shaves his head, suits up and goes on a killing rampage with a bag of guns.  It’s like the step that D-Fens from Falling Down was too afraid to take.  The end shootout is actually breath-fucking-taking.  Worth the price of admission.  Like any good shootout, every gunshot is devastating and the camera confident.  Bacon, literally, gives them both barrells.  It could almost pass for a ‘Raid’ deleted scene.

In a way, this is kind of like the nasty, scumbag cousin of ‘Taken’.  It’s a good fucking movie and I wouldn’t argue against a sequel.