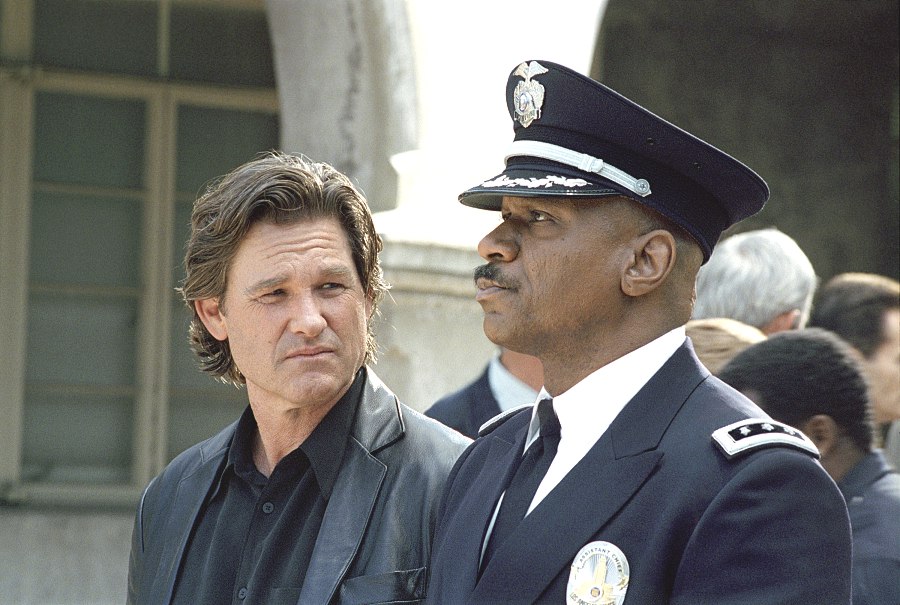 Kurt Russell has made some damn good movies, including some that are pretty underrated. Here’s the proof, if needed, that he was still doing it in the 2000s. I’d not seen this one until I came across the DVD in a charity shop the other day and it turned out to be 1 euro well spent.

Russell is on fire as a 3rd generation Los Angeles gun slinger and member of LAPD’s Special Investigations Squad, Eldon Perry, investigating a robbery and multiple homicide with his rookie partner Bobby Keogh (Scott Speedman) in tow. We tag along as Russell shows the new guy how it’s done, roughing up one suspect after another as they get closer and closer to the truth. Russell’s crooked, see? Planting evidence? Check. Beating suspects? Check. Inciting murder? Check. But it turns out that the truth is even uglier than Russell’s own methods, which are pretty God-damn ugly.

The script was penned by David Ayer. I’m not a big fan of his, but he did some nice work here. There are some great exchanges, such as when Russell matter-of-factly squeezes a young female attorney for a warrant. “Don’t you have any shame?” she asks indignantly. “I try not to,” sniggers the cop. Somehow, even as a bad tempered, violent, ruthless and chauvinistic brute, I can’t help but find Kurt Russell incredibly likeable and I found myself smirking along with him all the way to the bitter end. And of course he does have a good heart under all of that, as we learn at the end when he puts his own neck on the line in the name of redemption.

One of the coolest things about the movie after Kurt Russell’s performance is the realism. This was ensured by director Ron Shelton hiring an ex-cop as a special adviser. The investigations and interrogations (although taken a little far at times) are starkly realistic, whilst Russell is electric and totally believable. I reckon this guy would’ve kicked ass if he’d been a cop in real life. Ving Rhames also puts in a good turn as the forthright wannabe Chief of Police who’s eager to take him down along with his corrupt superiors: “Don’t hide behind LAPD blue – it’s not your colour” he grumbles during an awkward elevator ride with Perry’s boss, the rotten core of the department, Chief Van Meter (Brendan Gleeson, also putting in a solid performance).

The film is set in the days leading up to the LA riots, which helps to ratchet up some tension as the city braces itself for the verdicts handed down to the cops who beat up Rodney King and allowing for some nicely recreated mob violence towards the end as the tension boils over and the riots break out, with Perry stuck in the middle, tracking down a black suspect, when it all goes down.

As for scoring the movie, I liked it, for the story and Russell’s hard-nosed performance more than the action, which is not exactly in abundance over the course of the film’s near 2 hour running time. If this one has slipped under your radar for the last thirteen years, like it had mine, check it out before settling for one of the many lesser manly movies out there.