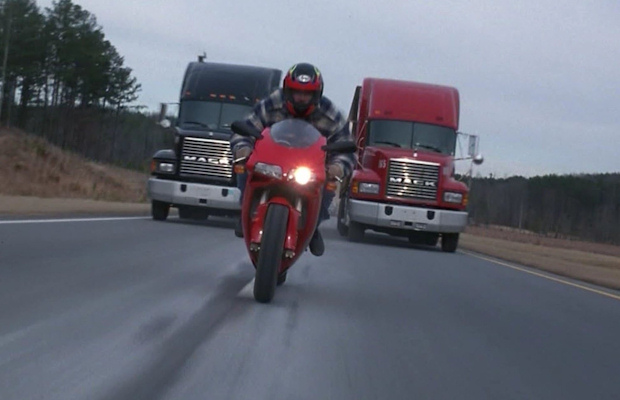 Runtime: 98 Mins
Rated: R
What To Expect: A movie that hasn’t held up well with no extras

I’m not sure how many are aware of this, but this movie, Fled, has just had a Blu-Ray release in recent weeks.  Maybe some aren’t even aware of the movie itself.  It is a cut of 1990’s action/thriller of the B-movie variety, with Laurence Fishburne putting in a pre-Matrix effort alongside Stephen Baldwin, that’s the ‘Usual Suspects Baldwin’.  Some might want to check it out on an impulse buy for the premise alone – two cons chained together go on the run after a scuffle with guards during some roadside ditch work.  But I wouldn’t recommend it in all honesty.

This film was sort of billed as a fugitive movie, obviously inspired by that other title of the same name.  Fled is a poor man’s ‘The Fugitive‘ and quickly goes off the rails when it leaves its premise, cons on the run, and goes into conspiracy thriller territory.  This is 1996, so if the film was as good as it hoped it was going to be in that regard, it would’ve ended up starring Harrison Ford or Mel Gibson.  Or even Wesley Snipes teaming up with, oh, I don’t know, Keanu Reeves.  But like I always says, a small budget movie with a big concept script is more often a mess than it is a high accomplishment.  Few can get it right.  You can tell that Kevin Hooks as director makes it even worse. 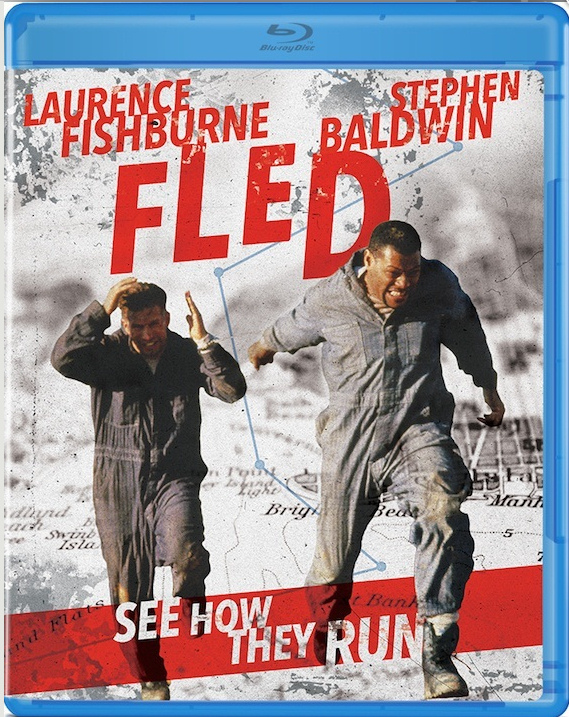 There are a few things of merit here.  The movie doesn’t take itself too seriously, it has some fun parts here and there.  It’s also very much a retro action film, you can tell that days and even weeks are put into certain scenes as opposed to the trickery we might see today.  But it’s the plot holes that let it down.  You could even play a drinking game with this one – spot the outrageous departure of logic.  In fact this movie is often downright hilarious.   The idiocy shared between Fishburne and Baldwin’s characters gets worse by the minute, to the point of unintentional hilarity.  I wouldn’t have been surprised if Leslie Nielson popped up in a cameo.

I mean for instance, you are an ex convict.  The entire country is looking for you.  What does Stephen Baldwin’s character do?  How about hitting the nearest nightclub, then making a spectacle of himself on stage, fornicating with a stripper after two locals (why was he even talking to them?) challenge him to a bet?  As scores of onlookers cheer him on?  Is this a wise move for a man on the run?  Meanwhile, Fishburne is trying to get into the pants of the wife of an ex cop! Some might enjoy these charms, but you really need to be warned.  It’s sloppy and then some.  This would never have happened in a Clint movie.

The Blu-Ray release isn’t much better.  The extras, for one, are about as thin as the brains between the world’s most stupid fugitives.  There’s nothing there.  Look man, from Olive Films, I don’t know if you could have expected any better or even that the movie was released on this format at all.  Maybe this is the best you could have gotten, just the movie itself.  To that end, it’s fairly decent.  I mean, the transfer is better than you’re going to get on some shitty compressed ‘HD’ TV channel at 11pm some night.  That includes lossless DTS HD, which you really can appreciate during the gun battles for instance.

This is not a great movie.  Nor is it a great release.  But hey, it’s out there.