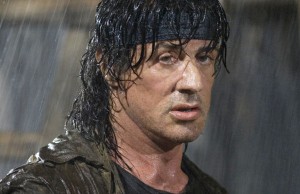 When they started reviving classcs in the 00’s, it didn’t look good.  I think Terminator 3 started it all, a film that I categorically hate (Campinator might be a better title).  Then there was the double blow of Alien Vs Predator.  Only Paul W.S. Anderson could ruin two franchises with one movie.  Then Live Free or Die Hard.  These were bad updates to good films.  So when Rambo was coming down the pipe, the worst was feared.  I specifically remember how my mind was placed at ease – a violent, ripping three minute preview being passed onto Aint it Cool. After seeing that clip, I gave in and allowed myself to be hyped.  This was no ordinary trailer and it seemed to fit right with the legend.

And it didn’t disappoint. Rambo IV kind of a mixture of First Blood, which I think is the best of the four, and Rambo II+III.  Rambo is less a caricature than he was in the previous two, but retains the sheer kinetic excitement of both. Rambo is vulnerable again, that helps. Another ‘refreshing’ thing about this film – and a reference to Stallone’s guile, is the setting and theme.  To be honest by 2008, I was getting sick of Middle Eastern movies, so it was good to have Stallone come out of left field with Burma as the hotspot.  With this film, it’s also like Stallone stuck two fingers up to the cookie-cutter direction of the action genre.  By 2008 the Comic Book Movie was taking over everything, seemingly the action genre too.  Where were the films for people who didn’t give a shit about feature-length toy adverts?  Over here, said Rambo, giving a big Fuck You to trending.


I have a shit eating grin on my face when I watch this movie.  What you see is what you get.  Limbs fly, men’s throats get pulled out, men get gutted, bodies explode.  Have .50 calibre weapons ever appeared so good as they have in this movie?  The Barrett and Browning .50 guns are handled by Stallone as if they’re individual members of the cast.  The Barrett discharges like a bomb going off, and Stallone turns an entire cast into chaff when he spawn-camps with the Browning.  You know, if it wasn’t for the ballsy action and violence in this movie – desperately out of place in the 00’s – we probably wouldn’t have got an Expendables trilogy.  This movie practically revived an entire genre, like a bull raging through a toy-store. It somehow lived up to its predecessors.
Is it the best Rambo?  No, the first two are superior.  But most who appreciate the genre don’t appreciate its importance.