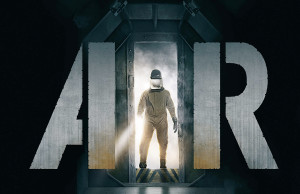 This film reminds me of a recent effort by Michael Biehn, The Divide, where a group of people were trapped in stuffy squalor in the midst of nuclear fallout.  That film was sleazy disgusting trash – who wants to see a film high on rape and low on plot? This film, starring The Walking Dead regular Norman Reedus and Djimon Hounsou, of Gladiator and Fast 7 fame, is somewhat similar.  More exploitation with B-listers stuck within very cheap looking confines, wondering about the radiation above.  This one may have B-list actors, but it is D-list material that squanders a good concept.

After what we can only assume was World War 3 (some writers think it’s smart to leave people wondering – but it’s not a good idea when almost nothing else happens in your movie), the world is deprived of clean oxygen and the finest that humanity has to offer are stored in incubators.  Scientists, scholars etc.  These incubators and the facility that houses them require routine maintenance, which can only be done by human hands.  The job of Hounsou and Reedus, of course, who are allowed out of their own capsules to keep an eye on things.  Then of course, hallucinations and cabin fever set in.  After one of their own capsules breaks, cold stares and thoughts of murder are afoot.

You don’t need a colossal budget to make something like this work.  All they needed to do was nail the feeling of claustrophobia and the fear of the ruined earth above.  But they most certainly didn’t do that, instead you’re pretty much stuck watching two dudes hanging out in a boiler room that is not so convincingly masquerading as a deep government NBC bunker.  Both Reedus and Hounsou are good actors and neither slouches, but their role are clichéd and overwrought.  Hounsou’s character in particular might as well literally have been a robot, with little to no back story.

A nice premise, Air is not offensively bad.  But it’s jammed in first gear until the 96 minutes are up.