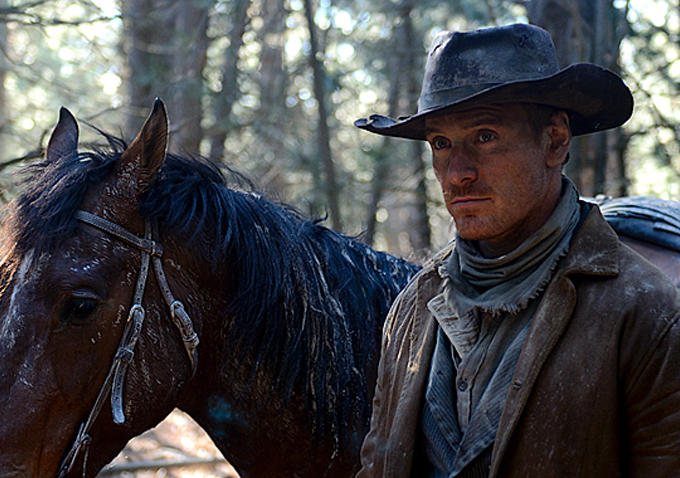 The thing that struck me about this movie when it came out earlier this year was the cinematography and scenery, it was often downright stunning. But it’s also an old fashioned western that properly captures the nuances and primitive charm of the era, where a man could sit around a camp fire telling a yarn about how he killed a varmant, only to discover that the man was innocent, to laughter from his audience regardless.  Slow West aims low and hits high, I’m glad I caught this one, it’s a nice hit for our anticipated western renaissance.

Slow West features Kodi Smit-McPhee as a wet behind the ears manlet traversing alone through ruthless bandit territory in the old American west, to link up with his sweetheart and old man.  At any minute, the kid is about to be predatored by Injuns, varmants or assorted trash.  Hollow eyed killer Michael Fassbender spots the greenhorn and sees the inevitable, and decides to escort McPhee for a princely sum of 50 dollars.  A good turn of heart, you might say, perhaps Fassbender’s character is looking for redemption after a lifetime or gunning down pissants the land over.

What a humble yet engaging western.  Unpredictable and well written, although to reveal more about the plot would basically spoil the movie.  The trailer did not strike me because it seemed almost to suggest that the movie was a comedy, but it isn’t, rather an old-time western with a streak of black and morbid humour running up its back.  McPhee is fine as the weedy kid, dodgy Scottish accent aside.  But Fassbender is the star of the show, playing a gruff black-hole of an outlaw/bounty hunter, yet still managing to handle the humour effectively.

I’d advise picking this movie up on Blu-Ray purely for the quality of the feature itself but also because of how it is delivered. This transfer is extremely pretty and even though it comes from a digital source does not lose the ‘natural’ feel to it.  It has strong depth and impressive colours but again, retains its natural vibe.  Extras are on the slimmer side however.  There is a small YouTube-sized featurette with some quick interviews, but also around 9 minutes of deleted material.