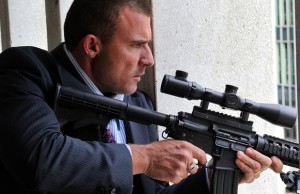 I must confess to being a Uwe Boll sceptic at one point.  I’d always suspected that there was more to him though, that he might be a troll. And after viewing this it was pretty much confirmed that he is, but that he can apply himself as a bit of a craftsman too.  The movie has poor promotion, on the surface, combined with Boll’s poor reputation, the cover suggests a trashy actioner.  It’s anything but.  Turns out this is an introspective, patient and touching piece of political commentary.  Part ‘The International’, part ‘Death Wish’, it also has a thrilling and violent climax.
Unbelievably, this movie holds an approval rating of just 25% on Rotten Tomatoes.  This, from a site that holds The Avengers at a baffling 92%.  It just goes to show what influence the power of commercial (and even cultural!) conformity has.  That, and a crate full of ‘review copies’ arriving via Fedex from the studio on your doorstep.  The benefit of writing for a small site like this though, is that you can tell it like it is.

Any working man will love this story.  After bankers, brokers, speculators and all around kleptocratic scum ride the economy ’till it crashes, Dominic Purcell loses his sick wife because he can’t pay her medical bills.  So he heads on down to Wall Street with a fucking machine gun.  Get ’em, Dom. Now consider this, overrated movies like The Dark Knight and Iron Man have bored billionaires beating up terrorists – I can’t be the only one who feels patronised by this – but in contrast, in ‘Assault on Wall Street’ our hero is a working man, a security guard who works by the hour.  And he’s going straight for the jugular and the source of all problems.  Ain’t nobody got time for CGI-riddled propaganda in his world, the man has real problems.  Having lost his wife, having had his house wrongly foreclosed, somebody is about to pay.  The people that Tony Stark and Bruce Wayne have lunch with are about to be terminated with extreme prejudice.

Not that this movie is a gratuitous snuff movie.  Not at all.  As I mentioned above, it’s understated and shows respectable restraint.  There’s one scene where the security guards are on lunch break and are discussing how the ‘one percent’ are the real criminals and are ruining their lives.  This scene is outstanding, it has the temperament, acting and class from an episode of ‘The Wire’ yet conveys a message of Realpolitik.  This lucid tone is used to build Purcell’s dire situation for the first two acts, before he lets rip in the third.  The manly retribution?  It could barely be more satisfying.  Purcell, in the performance of 2013 and playing a military veteran, is the wrath of fucking God.  The massacre is prolonged, competently directed and satisfying.  And yet supported by a sense of justice throughout, not once does the man become anything less than a protagonist, despite the blood covering the walls.  And to pull that off without being offensive is the hallmark of a good director on top of things.

A movie only Boll, a man who has defeated detractors in boxing matches, would probably have the balls to direct, the antithesis of The Dark Knight Rises in substance and aesthetics.  Who knows how he got it greenlit.  And hey, it has Eric Roberts in it.