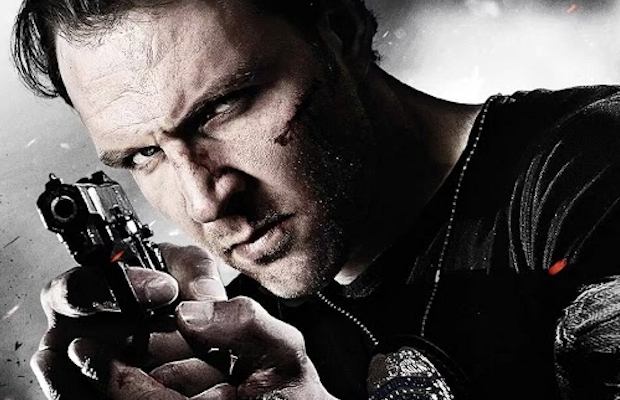 WWE continues to release movies that are oddly in contrast with their central pro wrestling programming.  One is a noxious weekly brew of corporate political correctness and the other a streak of violent and indulgent manly movies.  Manly, but more often than not, just as shit.  I mean why say otherwise if it’s true?  They keep pumping out these B-Movies of the action variety, so here we go again.  It’s not even a yearly thing now, here’s this season’s WWE DTV yarn featuring the latest wrestler (Sorry, superstar.  The word ‘wrestler’ is banned on WWE  TV, I shit you not) in the movie contract queue.

I have not seen the previous 12 Rounds movies, but this one is a direct sequel to the previous movie and for a while at least requires prior knowledge to appreciate the initial character relations.  Dean Ambrose plays John Shaw, a cop just returned to duty.  He comes across evidence that incriminates Roger Cross, who plays the villainous corrupt cop Burke.  Burke and his corrupt cop posse cannot let Shaw leave the police precinct with the evidence or alive, so they ‘lock down’ the joint, faking a fire, in an attempt to seal him off and kill him.

You know, this Die Hard clone wasn’t doing too bad for a while.  I mean as it starts it’s ‘not terrible’, which is an achievement for a small action movie.  Shit, the premise is even good and with more skilled writers and a good director they might have even got a good Die Hard sequel out of it.  Then, however, came the first action sequence.  Can you guess the problem yet?  Cameras shaking violently, editing done by monkeys working for cigarettes.  Sorry, but this is an action movie and the action scenes are close to unwatchable.  You might as well make some coffee when kinetic confrontations start.  Begging the question then, why bother?

Aside from that, in between the action sequences, the camera is still shaking.  Must we shake the camera when aiming it at a man typing on a keyboard?  Or a scene where a man and a woman talk in a corridoor?!  The acting is also terrible, with Roger Cross’ performance belonging in an Airplane! movie and Dean Ambrose looking tired, wasted and afraid to express himself.  Maybe he was worried about how Vince and Stephanie McMahon would react if he did something a certain way.  And I’m not even joking about that.

At least it didn’t go the ‘other’ route of targeting Dubya Dubya E’s large family demographics pool, I guess.  They’re also back to using real blanks in their firearms, unlike the fake muzzle flashes of The Marine 4: Moving Target.  Final word, another DTV to avoid.  A so-so screenplay ruined by terrible action scenes and bad acting.