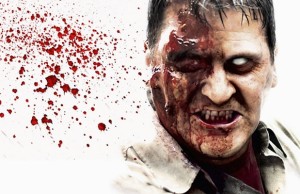 We should be more appreciative of this movie.  At a time when The Walking Dead is too busy with melodrama to show us zombies we look back to this winner with fondness. Most of us fear remakes and with good reason – most of them are empty and cynical slop.  Not Dawn Of The Dead (2004) though, which is, like its predecessor Night Of The Living Dead (1990), a successful remake.  Quite a feat considering it is a redo of the best zombie movie ever, the original Dawn Of The Dead.

This movie came at a time when Paul W.S. Anderson was single handedly ruining the zombie genre, at least in terms of quality, with progressively worsening Resident Evil movies.  We’re lucky he didn’t get his hands on this, although his destruction of Aliens, Predator and Resident Evil 2 might have been at too much a cost.

The premise is similar to the original, survivors take refuge at an abandoned shopping mall at the outset of a zombie apocalypse.  Let’s be clear, it was never going to outdo the original or even equal it, but despite that it is (at least this version, the director’s cut) as good as it was ever going to get for a Dawn remake.  The worst thing that could’ve happened would’ve been a World War Z ‘adventure’ or something with a PG-13 pitstop for humor every now and again.  Instead, Dawn Of The Dead comes at you hard and unapologetically, stopping every now and again to slap your back with some black humor.  I guess people had more balls in 2004, not only was it Rated-R but a chance was also taken with first-time director Zack Snyder.

The director’s cut runs 9 minutes longer and needless to say, it’s superior to the theatrical cut.  The original Dawn Of The Dead really took its time to let a feeling of morbidity, claustrophobia and doom seep in, it really used every minute effectively to that end. Something that The Walking Dead, by the way, struggles with despite having hundreds of minutes to call on.  The theatrical cut of the 2004 Dawn movie though, while still a good movie, suffered with its 95 min runtime.  It was a bit too rushed, especially with it’s chaotic and somewhat illogical ending, i.e. why the irrational and hasty departure of the cast from the mall?  The director’s cut lets the movie stretch its legs further, it’s not just that there’s added violence – the usual extra spray of blood etc – but added character reflection, more controversial shots (for example, more of zombie baby, the little rascal).  Overall though, while it could’ve ran for longer (there’s maybe a one too many people cast), Snyder did well to keep this out of the dumb 90-minute teen horror pitfall.

Probably the best zombie movie since the previous Romero remake in 1990.  And that’s a long time.  If you’ve missed this movie, don’t waste time on the 80% finished theatrical version and go for the version you were supposed to see.