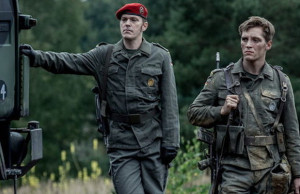 I’m a sucker for Cold War stuff, but especially Cold War stuff from the 1980s, when I was born.  It’s more accessible and relateable, which isn’t to say that a good 1960s spy yarn isn’t appreciated too.  I like The Americans for this reason, the TV show set in the early 1980s, about two Soviet deep cover spies embedded in the USA. This year the Germans have given the subject matter their own treatment with Deutschland ’83, another series about a Soviet mole, almost cut from the same cloth.  Although be warned, the entire series is subtitled.

I can’t recommend 1983: The Brink of Apocalypse as a documentary enough, as a preceding starter for this series, if you plan on watching Deutschland ’83.  The documentary shows us just how close the world came to nuclear destruction in 1983, probably closer than the Cuban Missile Crisis.  With that said, this series builds up to that, with a young Soviet, Martin (Jonas Nay), a border patrol guard from East Germany, who goes undercover in West Germany as an aide-de-camp to General Edel (Ulrich Noethen).  He must gather information about the upcoming NATO operation covertly, such as scaling walls to break into bedrooms and planting bugs under lampshades.

In fact, it’s almost uncanny how much Deutchsland ’83 has borrowed from the aforementioned documentary, which has a seriously fun comedic tone but nonetheless gives the subject matter its proper weight.  Even the intro appears to have ripped off the doc, they were definitely ‘inspired’ by it.  That goes for comedy too, the selling point (at least in the producers’ minds) of this series was that it had a light-hearted comedic bent to it, to juxtapose the lunacy of what was happening with what is often disarming farce, hindsight from safety… for now anyway, we are officially in ‘Cold War II’, so they say.

It’s lightweight stuff, this series.  Which is what has stopped it from being great.  Humour is good, go for it if you can nail it, even if covers the pending apocalypse.  But Deutschland ’83 isn’t the most funny TV show I’ve ever seen.  I’m not saying it has somewhat missed the mark because it tried to use humour, I’m saying the humour itself is flat and stuck in limbo between thriller and comedy.  Dramedy?  I would have much preferred this thing got serious, moody and doom laden.

That said there is value in here.  An area of recent history that has scarcely been covered before gets its due here, with some genuinely tense moments and a major play on nostalgia.  One scene that borders being classic is the young guardsman’s first exposure to a western supermarket, with an ’80s pop song blasting through the speakers.  He’s almost overwhelmed as he has entered a new and alien world.  He’s a good actor too, this Jonas Nay.  To summarize, lightweight, easily digestible.  Probably not for everone, but not a failure at all.