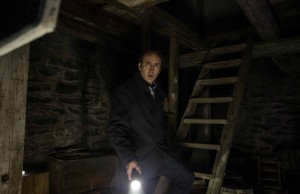 Nicolas Cage is master of the puzzled expression.  Whether this comes extra naturally to him or not, I cannot say. But in this movie, Cage runs around a lot (a lot) looking perplexed yet intrigued, even though the questions that he’s investigating are downright ridiculous, even for a paranormal movie.  I guess they call that charisma, to keep the viewers attention, somewhat, despite the story being pretty lowly.  It’s time for another Nicolas Cage hefty budget VOD movie.  This review is going to contain spoilers, because I have to highlight the silliness of the thing, really.

Cage plays Mike Lawford, a man who is neglecting his attention-starved boy so they he can finally iron out the big deal at work.  After he finally gets around to taking his son to a Halloween fair, Cage looks down while purchasing some ice cream to see that his son has disappeared.  A specter was stalking the boy beforehand, suggesting something unearthly is afoot.  Over the next year, Cage starts hearing voices and tries to put several disjointed clues together to find out where his son went.

Now try to see if this makes a lick of sense.  His son, along with multiple other children, were kidnapped by an irate ghost who got its ass burned at the state centuries ago.  For 11 months, the children were then held up at a house, stuck halfway between reality and the ether of hell, which Cage happens upon after some suspect research.  After Cage almost completes his search and rescue mission, the enraged entity throttles Cage with a choking manoeuvre, with horrible CGI carnage wreaking havoc in the background.  Does that sound cheap, noisy, unintentionally funny and not-too-scary?  Well it kinda is.

I mean I wondered, how did the ghost keep these kids for 11 months?  Did it threaten them if they tried to leave?  What did it feed them?  Ectoplasma?  And how did Cage’s kid’s ghost ride its own bike around the living room back at home, if the boy was still alive in captivitiy?  The investigatory skills of the NYPD are also probably the scariest thing going on in this one.  It isn’t the worst film ever.  You might be surprised to hear that Nicolas Cage is not trolling, that Sarah Wayne Callies is putting in a strong performance and that the kid is play by a child actor who isn’t annoying as hell.  That’s not enough though.