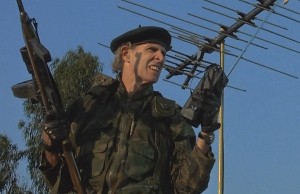 A while back we reviewed Joe Dante’s masterpiece The ‘Burbs on Blu-Ray, a release that included the director’s cut of the movie.  Up until the release of that movie, everyone only had access to the original cut of the movie itself.  Another version existed, the director’s cut.  Unlike many work prints and director’s cuts, this one has never found its way into rare movie postage back channels or torrents sites.  Basically because Joe Dante kept the movie at his home on VHS format.  A quarter of a century later it’s out there since it was shipped with the Blu-Ray release.  It wasn’t reviewed as part of the Blu-Ray review, it’s a separate movie, so let’s take a look at it today.

The ‘Burbs just barely qualifies as manly movie material – neighbourhood watch/paranoia and all that.  You gotta keep an eye on them fucking neighbours, especially when they’re unsightly foreigners who dig suspect holes in their backyard in the dead of night.  The perfect men to keep an eye on weirdos who keep horses in their basement would surely be Tom Hanks, Bruce Dern and Ric Ducommun, with Corey Feldman on hand to watch the show and deliver precision guided one liners.  We all know the story, if you don’t, you have no excuse.  This is effortless stuff and clearly all involved are having a ball.  In a way, all of us want to be Ray Peterson and all of us know an Art Weingartner.

A shot from The ‘Burbs alternate intro

This version is slightly different than the theatrical cut.  It’s not better, it’s not inferior, it’s just an alternate version.  Some things are rougher, for example the iconic opening that drops down from space is missing for an older more retro and stiff intro that harkens back to old 1950’s mysteries, with Hanks approaching the nutjob’s house in the middle of the night thinking something isn’t right for the first time.  The opening musical score is also inferior and slightly bland.  The infamous alternate ending is also here, which is a tad less exciting than the original.  It makes up for it however with added scenes.  For example, a slapstick scene involving a ladder and further scenes with the popular Ray character, including one where he and Hanks find a bomb in the backyard of the Klopeks.  And by the way, the film holds up quite well for an old VHS-rip, which is essentially what it is.

The original runs for 101 minutes, this one runs for 105 minutes, so there are differences but it would be unfair to call them substantial.  I’ve seen this movie many, many times and so the differences stand out to me.  But they are few and if there are more than those mentioned, then they are extremely subtle, I would have noticed them.  I wouldn’t actually call it inferior to the original.  It’s another 10/10.