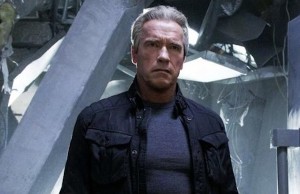 Earlier in the year when Terminator: Genisys came out, the biggest movie magazine in Europe (and possibly the world – might need to check on that), Empire, gave the movie a generous two out of five.  The whole thing seemed a bit…convenient.  Well fast forward a few months, now that the ‘PR Window’ (preferred corporate speak if you’ve ever been in touch with a major studio) has closed Empire Magazine has now altered their score of the movie.

Now that the movie is headed to Blu-Ray and DVD, Empire Magazine has given the film a one out of five for the home release.  And before you get the notion, this isn’t reflective of the whole package because the review, this time around, still only covers the actual movie, no extras.

Now let’s go back in time and double check that review from earlier in the year.  Oh.  Empire seems to have misplaced their earlier review.  Page Not Found.

This is the page you will see if you click on the Google result for ‘Empire Terminator Genisys Review’.  For those interested, some of the review can be seen with Google cache.  Now a cynical person might think that politics are at play here, with a large magazine slapping Paramount’s back.  I mean, in this November issue, Empire Magazine has an ‘exclusive first look’ at upcoming Paramount comedy ‘Daddy’s Home’.

Another coincidence, I suppose.

Finally, a word on review scoring systems.  One of the reasons I don’t like using 5 star systems is because it leaves room for ambiguity, which can be annoying when trying to convey how good/bad a movie is.  Our system is 10/10, which leaves less room for doubt.  But seeing this today, I realized that rating a movie out of five gives you a certain amount of leeway if your major magazine is built around (and for legal reasons, I’m not saying Empire is overtly doing this) shilling corporate trash.  Suddenly, a terrible movie is 2/5 whilst an average movie out later in the month gets the same rating.

Anyway, the industry relies heavily on skewed, early, reviews.  Is this another example?