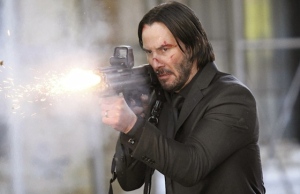 We all excited about John Wick 2, since the first movie was so freaking good.  The sequel actually starts filming pretty soon so ahead of that, Keanu Reeves has been talking about the movie.  Although he doesn’t give much away, it’s nice to hear something new about it.

“I think we have a really good premise, and it’s an organic premise. It’s basically — to me there’s John Wick and then there’s John. You know, John is the married guy whose wife just died, and that five years of his life. Then there’s John Wick, who’s the mythical assassin. In this, John Wick’s past comes and infiltrates John’s life and John Wick, in a way, has to fight for John.”

Reeves also talks about feedback being taken aboard…

“Chad and the writer, Derek Kolstad, they’ve really listened to what people have enjoyed about the work and how they speak about it. So there’s definitely that influence of the other world, the Continental world, the look, the feel, what it is about the movie, what made people like it; is definitely being paid attention to and the world opens up in this chapter.”