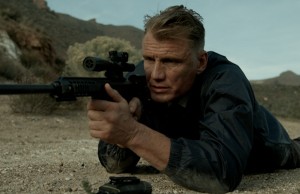 I really wonder why people like Dolph Lundgren and Danny Trejo involve themselves with schlock like this.  I heard a few years back that Dolph Lundgren was going through a messy divorce and that that could be part of the reason behind his incessant DTV trash streak.  But I’m really not buying it.  I guess the only reason for Trejo and Lundgren is that they just want to keep active and moving.  So if nothing better comes along, they take whatever comes up.  I wish to God that Lundgren especially would stop, take time out and cook up one ‘Skin Trade’ every few years or so instead of these steamers.  His fans deserve better than the likes of ‘4G0t10’.

This ‘black comedy’ sees a man, Brian Barnes, played by Johnny Messner, wake up in the desert among some pick ups, dead bodies and millions in cash.  He’s been shot himself.  He manages to flee the scene with four million, only to be pursued by crime lord Perez (played by Danny Trejo), DEA agent Rooker (Dolph Lundgren) and a corrupt Sheriff played by Michael Pare, who in particular is bent on taking that four million for himself.  Barnes spends a lot of the movie hanging out at the house of a couple he has kidnapped, only to advance his plans with the female, who is in cahoots with him.  Elsewhere, Danny Trejo frowns at lot, something he still has not mastered in 20 years of acting.  And Dolph Lundgren puts clues together.

Lundgren in particular cuts an odd figure in this ‘comedy’, for the most part he’s a bespectacled DEA hulk who seems to be trying to finish off dialogue and straight forward scenes with a humorous and ironic slant, but it doesn’t work because they’re so badly written.  At least there’s effort on Lundgren’s part, I guess, others like Pare seem to flat out not care.  So why should we?  The film tries to go up the Fargo or No Country for Old Men route, where brilliant actors are in perfect sync with darkly intelligent and funny scripts.  But it gets lost and becomes a tedious and confused quagmire.  The 85 minutes are long and strenuous.  Everything flows badly.

The music is also terrible and highly intrusive, giving us terrible audio cues.  As if to say, okay guys, this part is funny stuff.  Don’t watch this even for Lundgren.