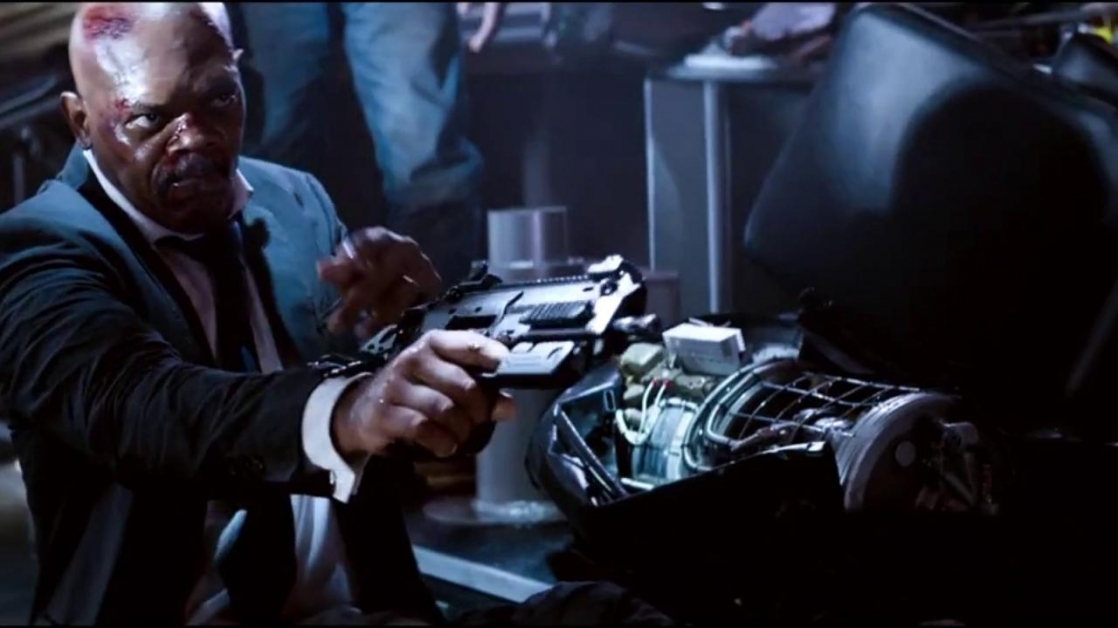 By all accounts, Big Game is a relatively inexpensive, direct-to-video action flick, yet it’s more skilful than such a description implies, delivered with unique zeal and flavour. Overseen by the same director responsible for the peculiar Finnish export Rare Exports: A Christmas Tale, this is a short but entertaining throwback to a simpler era of action films, playing out like a movie from the ’80s or ’90s, reminiscent of Toy Soldiers and Air Force One. It’s not original in any way, it relishes in genre clichés, and it’s pretty silly on the whole, but it’s a mostly effective endeavour thanks to the worthwhile cast, snappy pacing and creative premise, not to mention the plot is enriched by the sense of culture. Be aware, however, that this is definitely an oddity.

The President of the United States, Alan Moore (Samuel L. Jackson), is headed to Finland on official business, travelling on Air Force One under the protection of Secret Service Agent Morris (Ray Stevenson). But the plane is threatened, targeted with missiles by big game hunter Hazar (Mehmet Kurtulus) who has sinister plans for the President. With Moore ejected from the plane in an escape pod, he’s left alone in the Finnish wilderness, while Morris reveals himself to be aligned with Hazar. However, the President’s saving grace arrives in the form of 13-year-old boy Oskari (Onni Tommila), who’s in the mountains by himself to complete an animal hunt to prove himself worthy as he enters manhood. With Hazar closing in, Oskari and the President stick together, with the young boy determined to guide Moore back to civilisation.

Whereas Rare Exports was bolstered by its complexity and sense of imagination, Big Game is a far simpler endeavour, and a number of complaints can be levelled against the movie on a script and storytelling level. Often times, the picture cuts to the situation room with the Vice President (Victor Garber) and his usual entourage, but this aspect of the narrative is so undercooked and at times jarringly on-the-nose that it comes off like a perfunctory footnote. There’s a conspiracy angle at play here, but it remains unresolved, and the players involved are at times frustratingly careless. Ultimately, however, it’s unclear whether this is the fault of the writing or the editing, as there are reports of a 110-minute cut in existence that might have been severely truncated for pacing reasons. Whatever the case, the film in its finished form is far from perfect.

Fortunately, Big Game succeeds in other areas, showing more care with the main thrust of the story involving the President and Oskari. There is a degree of heart at play here, with Oskari’s journey into manhood a conventional but nevertheless effective story angle. It is worth noting, though, that the movie doesn’t play out entirely as expected – writer-director Jalmari Helander eschews obvious mismatched buddy comedy antics, and Jackson’s President is not a man of action. To Helander’s credit, he does well by briskly burning through requisite set-up and character development to get into the nitty gritty action stuff. Viewers who enjoy absurd-but-entertaining action flicks of yesteryear should find Big Game fairly satisfying, with Helander showing a deft hand when it comes to the set-pieces. This is a PG-13 movie, and though a full-blooded R-rated movie closer to Air Force One might have worked better, it doesn’t knee-cap the picture as much as expected. The budget, though modest by Hollywood standards, is pretty lavish for a Finnish production, thus Big Game is a visually interesting movie, making fantastic use of the eye-catching scenery, even if some of the digital effects shot do look phoney.

Helander has rounded up an impressive ensemble cast of established actors, led by Jackson who is reliably charismatic and watchable. The veteran actor is more grounded than usual, playing it mostly straight, which is appreciated. Alongside him is the young Tommila, a Finnish actor who also appeared in Helander’s Rare Exports. Tommila is not hindered by the usual pitfalls associated with child actors, and at no point does he get on the nerves, which is a miracle. He plays well alongside Jackson and he’s believable as Oskari, which works in the actor’s favour. As Morris, Stevenson sinks his teeth into a bog-standard villain role, which falls right into the actor’s wheelhouse, while Garber is his usual disarming self as the Vice President. Also of note is British actor Jim Broadbent, who’s something of a highlight as usual.

Big Game is short and sweet, clocking in at under 90 minutes. The movie could have done with more narrative meat on its bones, and perhaps a few additional action beats, particularly for the climax which seems to be lacking something to make it a total knockout. The script is not airtight either, and armchair critics will probably find a fair bit to nit-pick. But even if Big Game lacks edge, Helander knows what kind of movie this is, and has created a breezy, easily-watchable action film with humour and excitement. While it won’t work for every taste, I had a good time watching it.