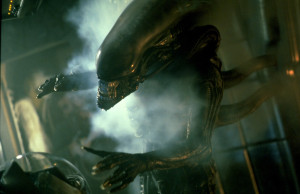 It looks like the biggest part of Ridley Scott’s career will ultimately prove to be the Alien franchise.  The movie that put him on the map in 1979 is set to have four prequels, all directed by him.  Of course, Prometheus is already in the can, so that means another three.

According to DarkHorizons; ‘…there’s the two further “Alien” prequel films he intends to shoot after “Alien: Covenant”. The Australian government committed a one off tax offset for “Alien: Covenant” to get the film made in Australia – raising it from 16% to 30%.’

Speaking at a press conference in Sydney today, Scott says:

“Its a very complex story. Its an evolution of what I first did with Prometheus 1. Prometheus 1 was borne out of my frustration that on Alien 1 in 1979 – I only did one as I don’t normally do sequels. I was amazed that in the 3 that followed that no-one asked the question ‘why the Alien, who made it and why?’ Very basic questions. So I came up with the notion of Prometheus 1, which starts to indicate who might have made it and where it came from.

So I’m now going to the next one, which is the next evolution directly connected with the first one, which was this Shaw, when [s]he replaced Michael Fassbender in two pieces and we’ll kind of pick it up there and it will evolve. When that’s finished there’ll be another one and then another one which will gradually drive into the back entrance of the film in 1979… So in other words, why was this space jockey there and why did he have an Alien inside him? And those questions will be answered.”

New Alien movies are always good, however I figure this bodes poorly for the proposed Aliens sequel.  If Alien: Covenant bombs, Fox will probably get cold feet.  If it’s a success, does that mean they’ll go ahead with more Alien prequels and drive Alien3 V2.0 well into the 2020s?