Snipes’ ‘The Player’ Is Cancelled – ManlyMovie

Snipes’ ‘The Player’ Is Cancelled 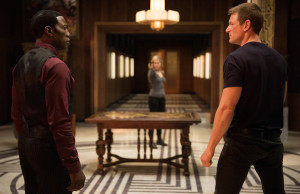 I would have preferred better for Wesley Snipes than this.  While I haven’t had time to check it out yet, his TV series ‘The Player’ has been cancelled by NBC.  They allowed the series to air to completion, but that’s about it.

The final episode of the one-half-and-done action-drama largely followed two stories: Alex’s search for Fuller, a former U.S. Marshal-turned-forger who helps criminals evade law enforcement and is believed to have had a role in Ginny’s vanishing, and Cassandra’s abduction/interrogation by Special Agent Nolan’s team.

I think Blade IV could do Wesley Snipes wonders right about now.  We don’t know how much longer this comic book craze will endure, but I wouldn’t like to see it implode just as Snipes’ Blade IV hits the screens.  Snipes’ next movie is titled Chi-Raq, a modern day adaptation of the ancient Greek play Lysistrata by Aristophanes, set against the backdrop of gang violence in Chicago.