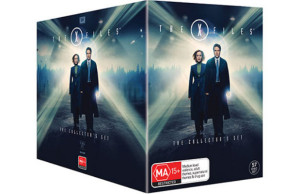 Two significant things will occur soon with regards to a 1990s nostalgia kick with The X-Files.  There will be the tenth season obviously, but also now the series will finally get a Blu-Ray blow out as all nine previous series will be released in one box set.

In fact it is now available on Amazon, listed as $299. however on the UK version of the site the box set appears much cheaper

The earlier seasons have also been remastered and are now presented in letterbox format, with the full original negatives being put to use.  That means some extra off-camera material is used, but only trivial.  Below are specs for this release;