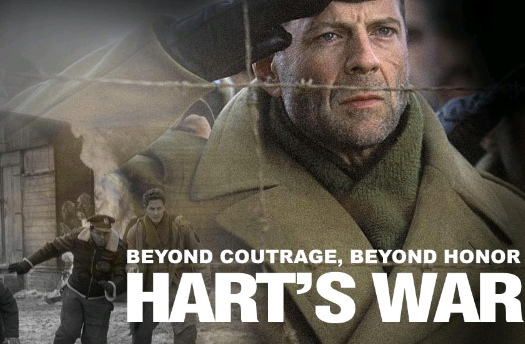 It’s time to get into the Christmas spirit and throw up some good wintry manly movies. It’s sad to say that since this movie Bruce Willis has only made two other good movies.  Tears of the Sun (2003) and 16 Blocks (2006).  And even then, let’s admit that calling those ‘good’ is an act of generosity.  Do the Expendables movies count?  Not really, cameos aren’t cutting it, Bruce.  In between he has made at least ten straight up ‘family’ movies and three cartoon capers.  Not to mention some sci-fi duds.  Yes, that includes Looper.
Anyway, Tis the Season!  And if there’s one thing Bruno is good at, it’s a good manly Christmas movie.  And Hart’s War is a good Christmas war thriller.  It has sturdy foundations:  Bruce Willis, WW2 and… an old favourite;  prison bust out.  Well I mean, can you blame him?  If I was in a prison camp and Collin Farrell came to my quarters, I’d start digging a hole under the fucking toilet too.  Or a hole to put Farrell in.
I’m pretty thankful for Saving Private Ryan.  It brought back the WW2 movie, guts, intestines and realism all trailing behind it.  Thanks to it, probably, we got the likes of Band of Brothers or even modern ‘realistic’ war movies like Black Hawk Down.  Or Tigerland.  Hart’s War comes in with that same stressed, worn and bleak palette.  Come to think of it, this is one of the first times Bruce had that same decade-long moping look on his face.  Come on Bruce, wake the fuck up!  With the aesthetics knocking it out of the park, the cast is good too.  Alongside Willis, Cole Hauser and Marcel Iureş dominate the screen.  These are the kind of guys who don’t really need to impose themselves as soldiers or ‘act’.  They’re convincing without doing very much, yet Collin Farrell and Terence Howard seem to reek of effort.  Why is that?

With (mostly) convincing soldiers established and setting nailed, Hart’s War also succeeds as a thriller.  Just about.  It’s one of those movies that has two things going on, which means it has replay value.  On first viewing, it’s a legal thriller.  On second viewing, it can be appreciated from a different angle as a military matter and through the eyes of McNamara (Willis).  Which leads me to a point, the tentative character of Hart is actually Farrell, not Willis.  ‘Hart’s War’?  What war?  Hart/Farrell is pursuing a legal matter.  It is McNamara who is still at war.  Although both their causes are just, McNamara’s War isn’t just about WW2, it’s about wheter or not to sacrifice a soldier – a ruthless tactical end to appease a strategy.  Willis ultimately takes the manly route and sacrifices himself.  Col. Visser and Col. McNamara make this film for me, one challenging the other but maintaining mutual respect.

In the end, this movie bombed both at the box office and critically.  Shit if I know why.  It’s better than the likes of Courage Under Fire.