Review: Extraction (2015) … Another Turd From Willis 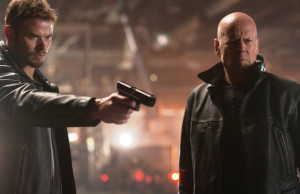 It’s Christmas, so you’ll probably have better things to do than endure this vomit.  I know I have better things to do, so once again I’m kind of falling on the VOD turd grenade to save ManlyMovie readers some time.  I wasted over 80 minutes of my morning here.  How did I endure it?  By making a mental note of the hilarious plot holes, faults and lapses of logic and by attempting to count how many minutes Bruce Willis actually appears in the movie. Extraction may be a new low for the star of Die Hard.

The movie opens with Bruce Willis’ CIA Agent Leonard Turner getting himself out of a jam with some turrists, which leads to retaliation with Willis’ wife being murdered and his son escaping with his life.  Ten years later, Kellen Lutz, playing Turner Junior, wants to become a CIA Field Agent like his daddy.  But when Willis gets kidnapped again while in pursuit of ‘The Condor’, a Skynet-esque weapon that will destroy all of our electronics, Lutz must go on the hunt to find Mr. Willis – we’re also on the lookout for him, where is he anyway?  The clock is ticking, ‘The Condor’ will go live in 24 hours.  Oh, and breeze block Gina Carano is dragged along too.

The film is listed as 83 minutes.  However the corner cutting narrows the actual run time down to 75 minutes, making it one of the shortest movies I’ve ever seen.  This is handled with an animated credits intro sequence deliberately extended to about three minutes, and the film ending quite early with a very long end credits scene. Bruce Willis is also on the cover, yet appears in the movie for around 7-9 minutes.  And apart from one 30 second scene at a grave site, the entirety of his stuff was clearly filmed inside a single warehouse.  Willis also looks downright angry to be in this movie.  Sullen.  Aggrieved.  It’s getting worse man, his ‘acting’ in these DTV cameo con jobs.

The film is also laden with toe curling amateur hour annoyances.  I’ll give you an example, Gina Carano raises her handgun and points it at a man.  The old canned ‘cocking noise’ can be heard despite the gun she’s holding being hammerless and her fingers not moving at all.  Apparently guns cock themselves now simply by raising them through the air.  It reminds me on those terrible Paul W.S. Anderson movies, where blades make ‘schlinging’ noises simply by waving them about.  Gina Carano also does not belong in front of a camera, she’s painfully aware of the camera’s presence and her line delivery is excruciating.

The film also has action sequences with baffling editing and a ‘lazy’ camera.  I’m once again frustrated by a hack trying to ‘disorientate’ his viewers for effect. Did I also mention that certain parts of the movie have this greenish-yellow hue?  While the director may have thought that in doing that, he was making it look edgy and cool, the end result looks like someone pissed on the film reel.  Someone with real contempt for the whole ordeal.

Bruce?  Was that you?