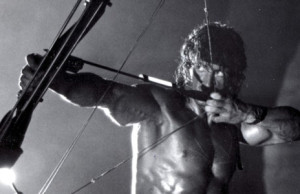 Last week someone dropped a dirty bomb on all of us when it was announced that Sylvester Stallone was on board to produce a TV series, featuring a young Rambo.  To use a favoured quote from a Dirty Harry movie, the news went down ‘like a turd in a swimming pool’.

Maybe that influenced Sylvester Stallone’s decision to abandon ship.  Here is what a rep of his has now said;

“Contrary to reports, Sylvester Stallone has opted not to participate in the planned Rambo television series in any way at all. I wish the others well with the project.”

Hopefully that closes the door on that abomination and it doesn’t get any further than mere internet talk.  Unlike Eddie Murphy’s disastrous attempt to do the same with Beverly Hills Cop, which actually made it to cameras… but has never been aired.