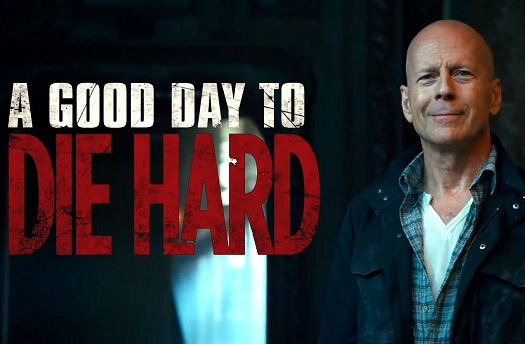 Bruce Willis should be ashamed of himself for appearing in this soft-assed shit, half of it filmed in a Bulgarian quarry.  For a while back in the day, after a snazzy R-Rated trailer, I had a glimmer of hope that it might, at least, upstage DHINO.  15 minutes into it though and reality came crashing down.  I was right in my initial surmise that this was just a a money-hat deal for greedy men, including Bruce Willis.  And I was right to worry about the so-called ‘R’ rating.  This is a rushed, softcore hackjob using the McClane and Die Hard registrations to earn a buck.  If you want to see what a real modern Die Hard looks like, go and watch The Raid.  That’s a movie I adored, just to prove that I don’t shit on everything I look at.  If you want the coroners report on Die Hard proper, read on.

The original Die Hard, even the original trilogy, featured a wise ass in an abnormal situation.  Here, Willis isn’t a wise ass.  Instead of being the classic wise ass, he’s pulling the ‘wise old man’ deal again.  You know, the one he’s had ever since the Sixth Sense.  The quiet, knowing stare. The introspective smirk – what is it with that smirk, Bruce?  Is there something you know that we don’t?  If not, just stop it.  And this time, his situation isn’t abnormal.  It’s farcical.  McClane in Moscow? Taking out bad guys?  Then in Chernobyl, stopping nuclear terrorism?  The fuck outta here!

There isn’t even a villain, a problem which the film apparently realises 2/3 in when it pulls a ‘swerve’ and creates a half baked one out of a guy who barely utters five sentences.  Long gone are the days of the Grubers where Irons and Rickman tore shit up by being ultimate (and funny) badasses.  I mean really?  To have no bad guy?  Shameful to all involved.  Did I mention this movie has the tired old ‘I hate my absent father’ cliche?

Now even though there’s a good chase scene in there, which is basically the only thing worth even looking at, it really does challenge you to sit through till the end.  And speaking of the end?  It looks like something from a YouTube tribute video, clearly tacked on to fill out an additional minute for the board of classification and slowed down at half speed to drag it out even further. That’s how badly put together this slurry is.

And now, a word on false advertising.  This movie was sold as an R-Rated one.  It most certainly isn’t.  There is no violence, swearing or sexual content.  Many scenes are reminiscent of The Matrix, where the biggest victims in the movie are concrete and glass.  Oh yeah, there are explosions and aggression, but always against some nearby piece real estate or masonry.  I feel conned.  I also heard that Willis says the iconic line in its entirety.  Not at the movie I seen, like the last Die Hard, the end was dubbed out by some convenient audible distortion.  “Yippee Kay-Yay Motherfuhuehhr*Cut*”.

What bothers me the most, though, is how cheap this whole movie is.  It’s like a Seagal DTV with Bruce Willis and some nods to McTiernan’s lighting – one of the only cool things about it, 50% of it is also filmed in the Eastern European wilderness.  Everybody involved in this movie, except for maybe Courtney, showed up with their hands out.  The only reason McClane went to ‘Moscow’ is so the greedy bastard executives could squeeze more money out of us with cheap tax rates in Eastern Europe.  To hell with the plot.  To hell with everything.  And Bruce Willis agreed. Bruce Willis,  I blame you.  I blame you more than the bloodsucking cockroach studio, or that spineless director.

You could’ve said no.  But you didn’t.

Related ItemsAll
← Previous Story 10 Underrated 2015 Manly Movies You May Have Missed
Next Story → Gibson Vs. Gervais