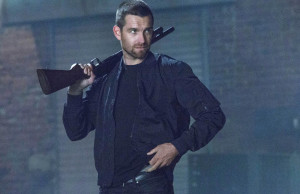 If you haven’t already gotten into this ultra manly TV series, you really should give Banshee a try.  A story about a thief who trolls his way into a Sheriff’s position, then begins beating local scumbags to a bloody pulp, while bedding their women in the process.

Now we have some details about the season 3 release on Blu-Ray.

Season 3 picks up a month after the Season 2 finale, when Carrie’s father, gang kingpin Rabbit (Ben Cross), finally met his demise after a climactic church shootout. Carrie, now exposed and estranged from her husband and kids, remains in Banshee, working as a waitress by day while moonlighting with Lucas, Sugar Bates (Frankie Faison) and Job (Hoon Lee) on a variety of local heists. As Lucas finds it harder and harder to keep his true identity from his deputies – especially Siobhan Kelly (Trieste Kelly Dunn), now his romantic interest – he and the Banshee police force become embroiled in a new conflict between Amish gangster Kai Proctor (Ulrich Thomsen) and Chayton Littlestone (Geno Segers), the vicious, vengeance-minded leader of the Redbone wing of the Kinaho tribe. And as fists and bullets fly in and around Banshee, Lucas concocts a new scheme that could net his thieves a fortune – by robbing a decommissioned Marine compound housing millions of dollars.

Related ItemsAll
← Previous Story A Look At Tong Po In Kickboxer: Vengeance
Next Story → The Exorcist Headed To Television