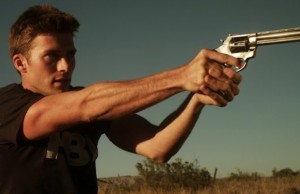 Let’s get one thing out of the way, no matter how hard Scott Eastwood tries to be someone else, be it changing his screen name to Scott Reeves (Fury) or doing the old ‘prove myself and move out of my father’s shadow’ routine, he’s always going to be Scott Eastwood.  There is no getting away from it, the man doesn’t just inherit the name, he is a dead ringer for Clint but also carries his demeanour and mannerisms, even if he isn’t conscious of it.  So it’s better that he just embraces it, be the new Eastwood.  Why fight it?

I’ll give you an example, Michael Douglas emerged from the shadow of his daddy and forged his own career.  At once, I’m a fan of Scott Eastwood and I’d like to follow his career for as long as my old man has followed Clint’s.  But he needs better movies than this sleeping agent.

Because now, unfortunately, I have to talk about the movie itself.  Eastwood plays Mitch, an unemployed twenty-something living in Jerkwater, TX, stuck with his mother and stepfather in the back of a trailer.  Seeking adventure he crosses the border with an equally deadbeat friend and at the first sign of trouble the latter leaves Eastwood in the lurch.  But Mitch handles himself well, which catches the eye of local paramilitary leader Nick Chinlund, ‘The Captain’.  Sensing Eastwood’s lack of direction, The Captain offers Eastwood five thousand dollars to join his outfit which will ambush drugs gangs and put a dent in the drugs industry.

The film is awkward, Chinlund’s ‘paramilitary’ unit is comprised of other misfits in their late teens or early 20s who are cardboard thin and rarely speak and children, that’s right, boys, aged from what looks to be like 9-12.  Eastwood is clearly a grown ass confident man and just doesn’t gel well with ’em.  In between botched raids on dangerous elements and overwrought scenes of nothingness in barns and shacks, Angela Sarafyan shows up on occasion to ease the tedium, with her incredible body and curiously massive sex appeal as the girlfriend of The Captain.  Of course, Eastwood notices this too.  ‘Are you fucking my girlfriend?’ asks The Captain.  Do you really have to ask?

God, this is a boring movie.  Not so much riddled with faults as it comprised of nothing.  The cultish misfits subtext is useless and doesn’t move and the whole thing is too long.  The only worthwhile thing, really, is Eastwood.  I don’t care what anyone else says, he’s charismatic and freakishly like his father, but deserving of better than this.