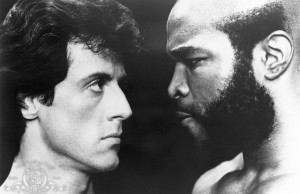 Every time Sylvester Stallone gives an interview, it’s sure to be a good one.  My favourite was an old Q&A he did with AICN (the link is no longer available it seems) where he spoke of an incident where some moron rear ended him at the lights, a show down then ensued with Stallone chasing the pissant into a restaurant and ‘beating him to a pulp’.  Anyway a new interview with the man is up at Deadline.

One of the more interesting parts is his mentioning that Rocky tradition has it that the actors must take a good shot to the head, for the camera.

I told him, there has to be a Dead Man Walking scene. He says, “Excuse me?” I said, it’s obligatory in every Rocky film. You have to take a punch in at least one slow motion shot, so the audience knows that you’re getting tagged, and that the punch hasn’t missed you by three feet. Mike goes, “I’ll do that, man.” I said, “But, it’s going to hurt.” He asked, “Did you do it?” I said, “Of course I did.” He goes, “Well, then I want to do it.” I go over to Tony Bellew, who’s a professional, 210 pounds and six-foot three, and I said, “Tony, put your best foot forward on this one because he wants to be initiated.” So Tony stands up, and it’s one, two, three, action, and then…bang. And I actually saw the stars. I felt so bad for Michael, and he went face forward on that canvas, and it was just perfect. I said, “Ryan, did you get that?” He goes, “Oh, can we do it again? The camera was wrong.” And Mike, God bless him, he’s semi-dazed, you can hear the birds chirping in his head. His bell had been rung. But to his credit, he gets up again, and he takes another shot by a professional fighter, so people can see the actual impact, and they’re startled by the force of this punch. It’s incredible. All I did was convince them that if you’re going to be in a boxing film, that this is an obligatory rite of passage. Michael B. Jordan had to take one for the team. And he did it well. He took like three of them in Creed.

The full interview can be read here, where Stallone talks other stuff such as which movies he would have liked to have appeared in.