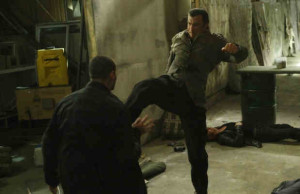 2009 was the year that the global economy started to recover. It was the year that Israel invaded Gaza and the year that Michael Jackson died. But the most important event was Steven Seagal´s decision that it was time. Time to take another camera crew with him to document his next adventure.

Filmed in 2009, the documentary “Driven to Kill” shows us that besides being an ex-CIA operative, an ex-LA policeman, a weapons and tactics expert, a deputy sheriff in Louisana and a recognized reincarnation of the lama by the country of Tibet, Steven Seagal is also a bestselling writer, selling crime novels under his alias “Ruslan“. He writes from his L.A. beach house, where “Driven to Kill“ starts. As we can see on the Sensei´s computer screen the californian sun inspires him to craft beautiful sentences like “his trigger finger slowly chased the trigger.“

Not only does the Sensei have a lot of identities, he also has a lot of hot girlfriends. This fact is documented as we see the Sensei enjoy a nice paper cup of coffee with his current lady. Said lady is a flirty little hottie who asks the Sensei to show her one of his old tricks. The one, where he puts a spike under one of three paper cups, mixes them up and then crushes one of the cups without hurting his hand. The Sensei is reluctant at first but then the girlfriend makes him an offer only a man of lesser manliness would dare to refuse: She promises the Sensei a three-way with her best friend if he’ll show her the trick. So the Sensei mixes the cups, and smashes one of them, without even blinking. Asked how he knew he wasn´t gonna impale his hand, the Sensei answers: “I didn´t. The trick was just not to give a fuck.”

Later in the documentary, the Sensei will perform another magic trick where he lets a glass disappear between his hand and a thug´s face, causing the thug to drop dead. This adds “magician“ to the many professions of Steven Seagal an I´m sure my fellow Seagalogist mucho macho will agree when I say: The Sensei is a man of many talents. And a man of great charisma.

As we see in “Driven to Kill“ the Sensei´s charisma is so powerful it even changes his physical appearance. This is best illustrated in the scenes where the Sensei is not facing the camera. In those shots he looks like a completely different person and the reason is simple:

Since he is only filmed from behind, the energy that fills his eyes is not floating the camera lenses, which makes him look different. This natural phenomenon also occurs in other circumstances. For example when the Sensei is doing very quick aikido moves. In those circumstances the camera is not powerful enough to capture the Sensei´s „Chi“, so an optical illusion is created, making him look different during high kicks or aikido rolls. It´s a shame that modern cameras still can´t fully capture the Sensei´s greatness. It´s also the reason he can´t bring aikido to the Olympics since his mere presence is considered a performance-enhancing substance.

The documentary “Driven to Kill“ chronicles the events that happen to Steven Seagal under his pseudonym Ruslan as he visits New Jersey to attend his daughter´s wedding. If you think Robert De Niro was a tough cookie, think again, ´cause the sensei is as badass as in-laws get. As any good father would do, he threatens the groom to kill him if he does his little girl wrong. And he adds: “You don´t know my bad side. Anybody who could tell you about it is dead.“

Soon after that, the shit hits the fan. Some gangsters break into the house, kill the sensei´s ex wife and put his daughter in a coma. Bad mistake. Standing at his daughter´s bed, the sensei makes a promise. “The one who did this to you will cry tears of blood“. Indeed, that´s exactly what happens at the end, when the sensei pokes the main bad guy´s eyes out with the barrel of a 38.

But before that he has to set his son in law straight. This guy has nothing better to do but to sit around and cry. The Sensei makes it very clear that this is not how a real man behaves. A real man avenges the girl he loves. As the documentary shows, the sensei takes this privileged young man with him – on a „roaring rampage of revenge“ – to quote Quentin Tarantino. Seagal shows this young lad how to be a man. A man that can take care of himself – “Don´t get shot“ – and his gun – “learn to respect the tools of your trade!“

“Driven to Kill“ documents this unique educational program while giving us a lot of manly scenes, that make this documentary a lot of fun. We get a cool shootout accompanied with heavy metal music. We get badass aikido fights in front of hot topless chicks and a knife fight with the sensei stabbing a guy 20 times or more.

We get car chases like in the good old days and one liners that could be right out of the 90ies. “You don´t know this guy. He will show up at the funeral and beat me to death with a shovel, then bury me in front of the priest.“

But above all the documentary channels some touching emotional scenes in the life of the sensei. The most touching one is some emotional mentor/student talk between the sensei and his son in law, taking place in the private room of a strip club. While the two men philosophize about life, mourn seagal´s daughter and start bonding, a hot stripper is dancing and going nude right before them. I think it´s safe to say that something like that has never been put on film before.

This documentary shows us a lot of things we thought we would never see again in the Sensei´s modern adventures. We even get the Sensei chasing a guy on foot. Something he hasn´t done in a very long time. Other people of his age would have a heart attack if they exhaust themselves like that, but not the Sensei. After all, no heart would be foolish enough to attack Steven Seagal.

One of the best things about the documentary is the awesome, High Noon-like showdown. As the bad guys attack the hospital where his daughter lies, Seagal has to fight off the attackers on his own which leads to a great sequence that is reminiscent of “Assault on Precint 13“. But 10 times more awesome cause it has the Sensei building a bomb out of nails and a balloon. Take that Macgyver!

In short “Driven to Kill“ documents one of the most entertaining Sensei adventures. It has awesome fight scenes, violent action, nude babes, great locations and badass music.