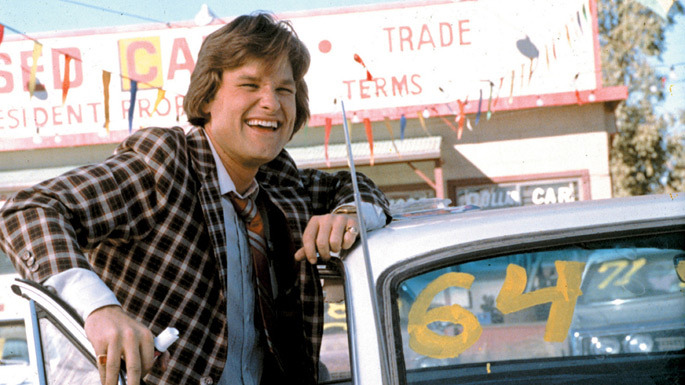 I haven’t posted a review here in a while.  I’ve been sent some of the worst schlock imaginable, some of it with once famous names, I just can’t muster the willpower to endure it.  VODmit movies is what I call them.  Actually, some of these movie can’t even make it to VOD but anyway, point is, sometimes you have to go back to the classics and this is something I did this week with an old Kurt Russell movie.  Have you seen Used Cars?  It’s actually one of the most funny movies of the 1980s.

There are two brothers.  Roy L. Fuchs (ha!) and Luke Fuchs, both brilliantly played by Jack Warden, are car lot owners on either side of the road.  The former is the villain of the show and sells slick new German models at his establishment, doing good business.  The latter operates a deadbeat shit hole and has fast talking conman Kurt Russell under his employ.  Roy wants Luke murdered so that he can inherit his messy lot, demolish it and thus open the way for a new highway that will bring in more customers than ever.  Indeed Roy sends a thug to scare Luke to death.

But he didn’t reckon on Kurt Russell becoming wise to the plan and disposing of the body, after he once promised Luke that he’d never let Roy own his lot.  No body, no inheritance.  Russell then goes to war with Roy and tries to steal his customers to raise $60,000 to buy his way into an election.  Although real car salesmen are the scum of the earth and going on to screw the people as aspiring plutocrats would be a natural extension, Russell is the conman with a heart and uses his scumbag skills to outdo and even bigger scumbag.

Few films aim to be hilarious and actually pull it off, but Used Cars, directed by Robert Zemeckis and produced by Steven Spielberg, actually had me roaring with laughter, such as when Kurt Russell hires strippers to syphon off customers from the competition, or his partner attacks Roy L. Fuchs’ best cars with a shotgun on live television.  What a witty and brilliant script that has real car salesmen pegged and downright classic performances from the actors, a career highlight for Russell actually and I wonder how many people even know of it.  It’s almost like a Coens movie before the Coens were even a thing.

The film’s narrative twists feel organic and inventive, yet it isn’t above crude humour either.  Who would’ve thought a corpse driving a car or a dog pissing on a man’s forehead would be so funny?