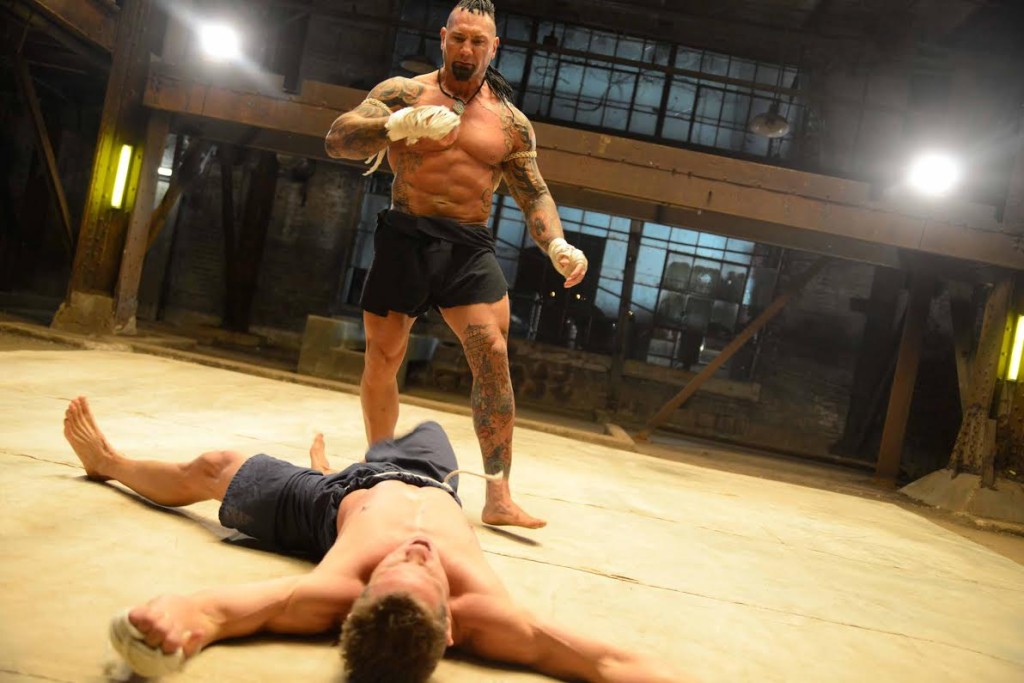 I was wondering when we were going to hear some news about this movie.  Above is an official photo sent to ManlyMovie and a press release below.  They’re apparently already preparing a sequel so I’m guessing they’re confident about the first.

LOS ANGELES, March 15, 2016 – RLJ Entertainment (NASDAQ: RLJE) has acquired all U.S. rights to the highly anticipated KICKBOXER: VENGEANCE.  Co-Written by Dimitri Logothetis (Stephen King’s Sleepwalkers) and Jim McGrath and directed by John Stockwell (In the Blood, Blue Crush), the film features the return of Jean-Claude Van Damme to the franchise (Bloodsport, Kickboxer) and a bevy of professional athletes including newcomer Alain Moussi (X-Men: Days of Future Past) Dave Bautista (Guardians of the Galaxy), Gina Carano (In the Blood), Georges St-Pierre (Captain America), and Cain Velasquez (Term Life).  The film was produced by Logothetis along with Nicholas Celozzi (The Lost Angel), Ted Field (The Last Samurai, Jumanji), Allen Knudson, Samuel Cory Timpson and Rob Hickman (who also orchestrated the majority of the financing on the film).

“Fans of Jean Claude Van Damme have been waiting for a long time for this reboot of the Kickboxer franchise,” said Ward.  “The film delivers more action and an amazing ensemble of fighters from Dave Bautista to George St-Pierre to Cain Velasquez and Gina Carano.   Fans will not be disappointed.”

“There is a spectacular beauty in martial arts films that audiences have been deprived of for a significant period of time.  Making KICKBOXER: VENGEANCE has been a priority and passion of mine for several years and I’m thrilled to be able to partner with RLJ Entertainment to bring this genre back to theatres,” said producer and writer Logothetis.

An update to the 1989 classic film KICKBOXER, KICKBOXER: VENGEANCE follows the story of Kurt Sloane (Alain Moussi), who travels to Thailand to avenge the death of his brother at the hands of Tong Po (Dave Bautista).  Kurt trains with the legendary Master Durand (Jean-Claude Van Damme) until he is ready to take on Tong Po in a brutal fight to the death.

Jess De Leo, Senior Vice President of Legal and Business Affairs for RLJ Entertainment along with Ward negotiated the deal with Logothetis, Field, Brian O-Shea, and Mike Weber on behalf of the film.