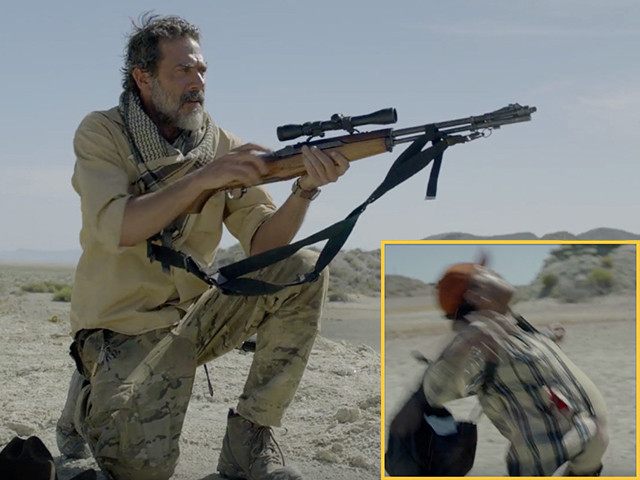 I covered this movie a while back, which actually looks quite good.  A movie about a villainous Jeffrey Dean Morgan (boy doe he make a good villain – check him out in The Salvation), a man who stalks the U.S./Mexican border with a rifle.  One that he apparently aims to use.

In the new trailer, things get somewhat political when Donald Trump enters the fray.  It uses words from his presidential announcement speech from June.

“The U.S. has become a dumping ground for everybody else’s problems,” Trump says in the audio included in the trailer, along with on-screen Spanish translation. “When Mexico sends its people, they’re not sending their best. They’re sending people that have lots of problems. They’re bringing drugs, they’re bringing crime, they’re rapists. And it’s gotta stop. And it’s gotta stop fast.”

At the conclusion of this short audio excerpt, one of the crossing immigrants is suddenly shot by the vigilante’s long-range rifle.  Cut to title card: “Los Palabras Son Tan Peligrosas Como Las Balas.” In English: “Words are as dangerous as bullets.”